“See you ladder, Chef! The game is 13 Dead End Drive, where you can get rich by accident. It’s nighty night for the Hairdresser! Someone will inherit a fortune, but everyone is dying to bump you off. A little trip for the Fortune Teller! First out of 13 Dead End Drive while their picture above the mantel wins. Lights out for the Boyfriend! The fun’s alive with 13 Dead End Drive!” – the 13 Dead End Drive 1993 TV Commercial

13 Dead End Drive is my absolute favorite childhood board game. Almost every week while growing up, I’d ask someone to play with me, and if I came up short, I’d even play it by myself. Now a few decades later, I asked my family to play with me again.

Though all my memories of playing 13 Dead End Drive are rosy, I wasn’t sure if playing as an adult would be quite the same. We cracked open a bottle of wine and dove right into the nostalgia, and I was not disappointed.

Decades later as an adult, I can confirm that 13 Dead End Drive is a classic! Murder mystery deception and creative 3D trap mechanisms mixed with random chance make 13 Dead End Drive a delightful (though morbid) family game, great for kids and a fun, light game night for adults!

The story begins with Aunt Agatha having just passed away without any surviving relatives. With her fortune up for grabs, her 12 friends and employees anxiously await the reading of her will. With only one who will inherit her wealth, it is up to the game players to survive and win Aunt Agatha’s fortune. 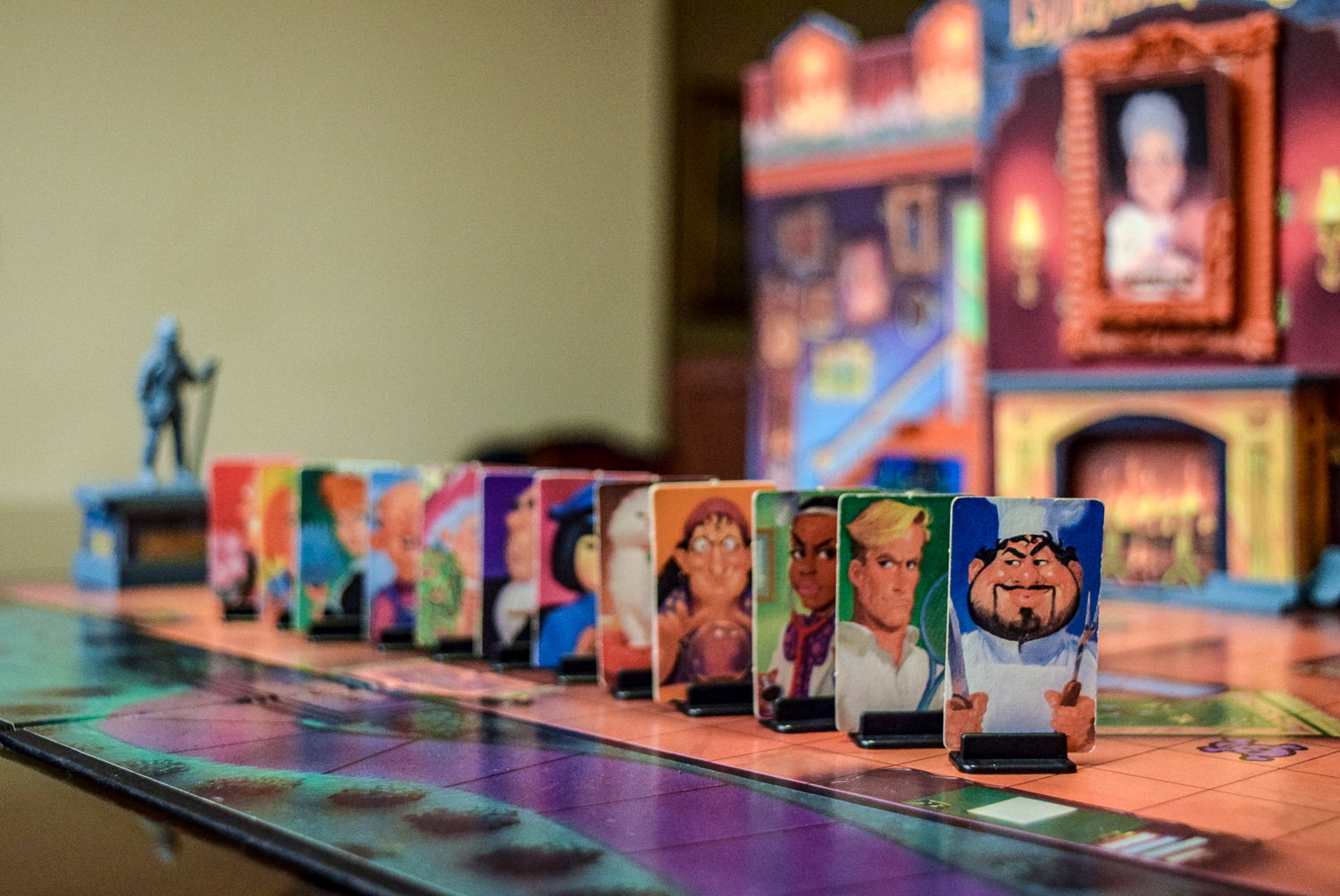 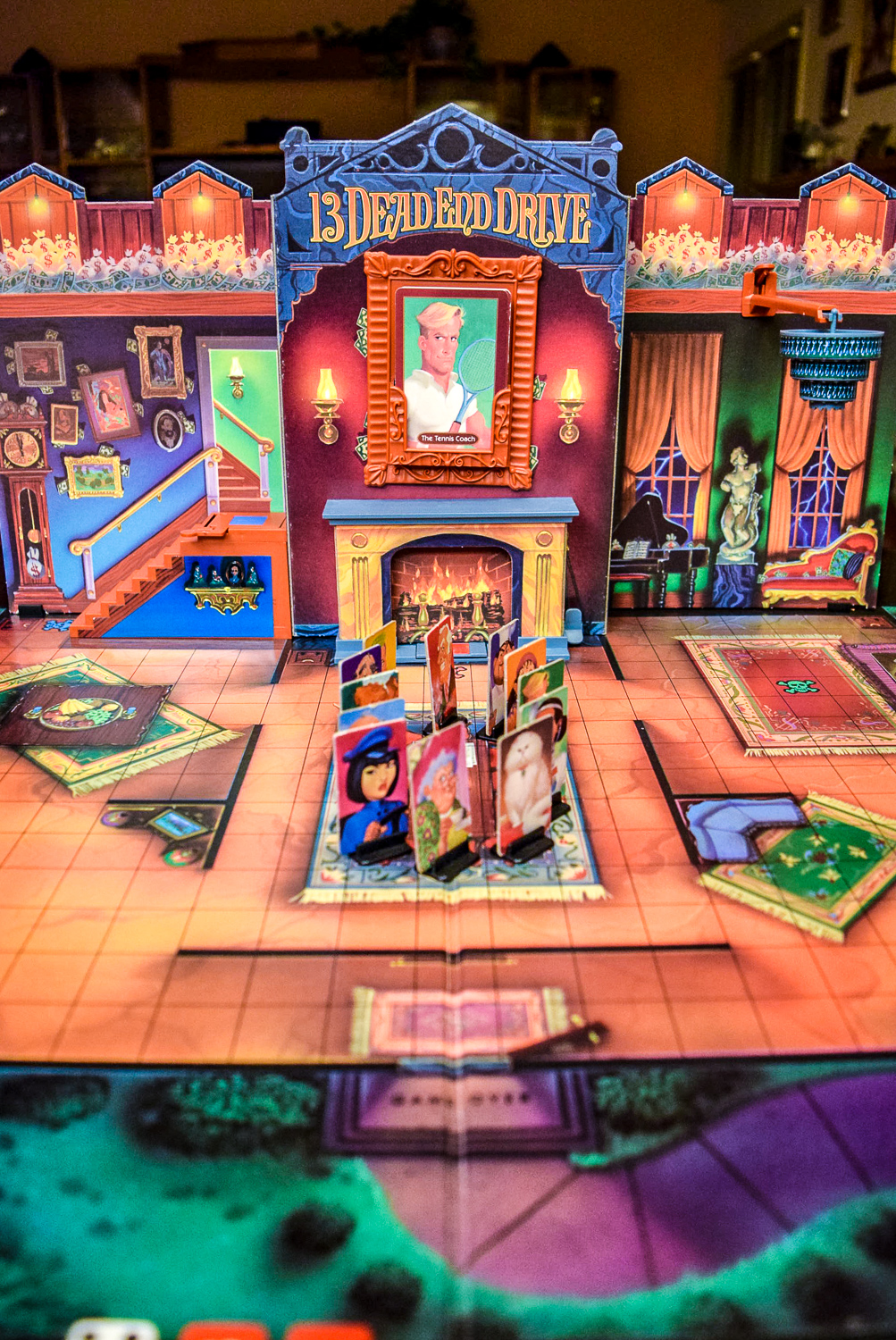 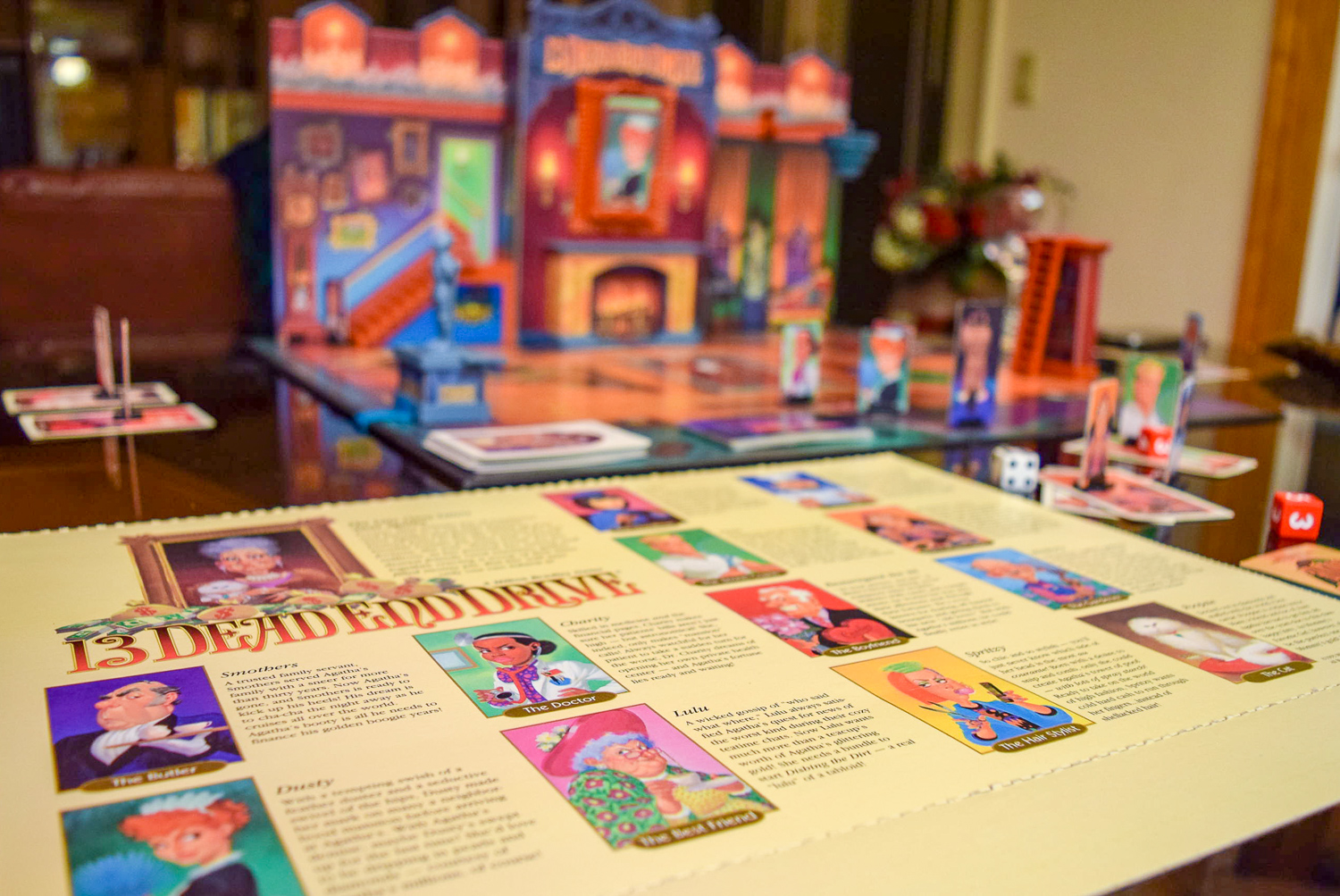 Essentially, you must escape the mansion while you are in favor, which is when your portrait is hanging above the mantel. Or you must be in favor when the detective arrives at the door or be the last one alive. 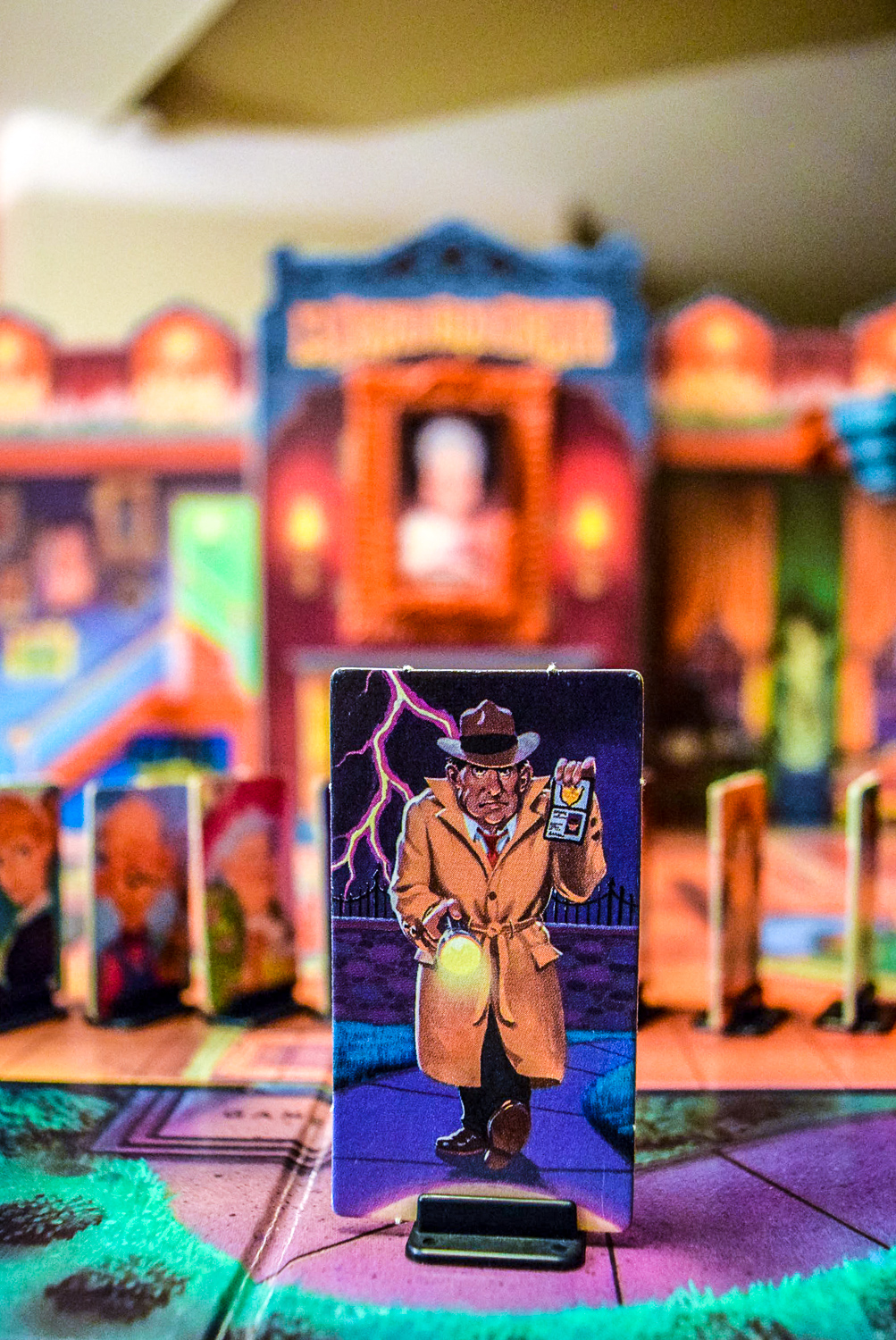 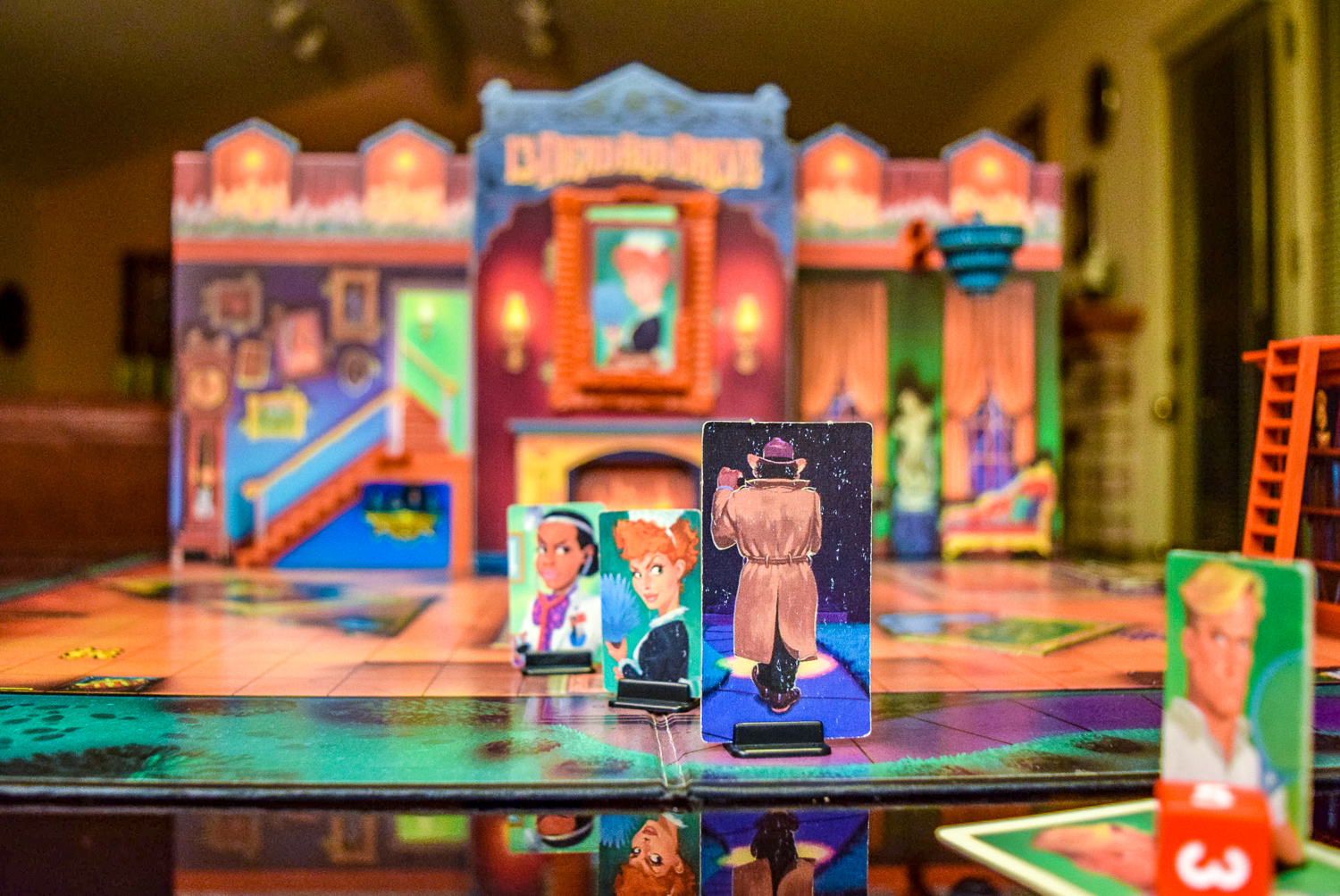 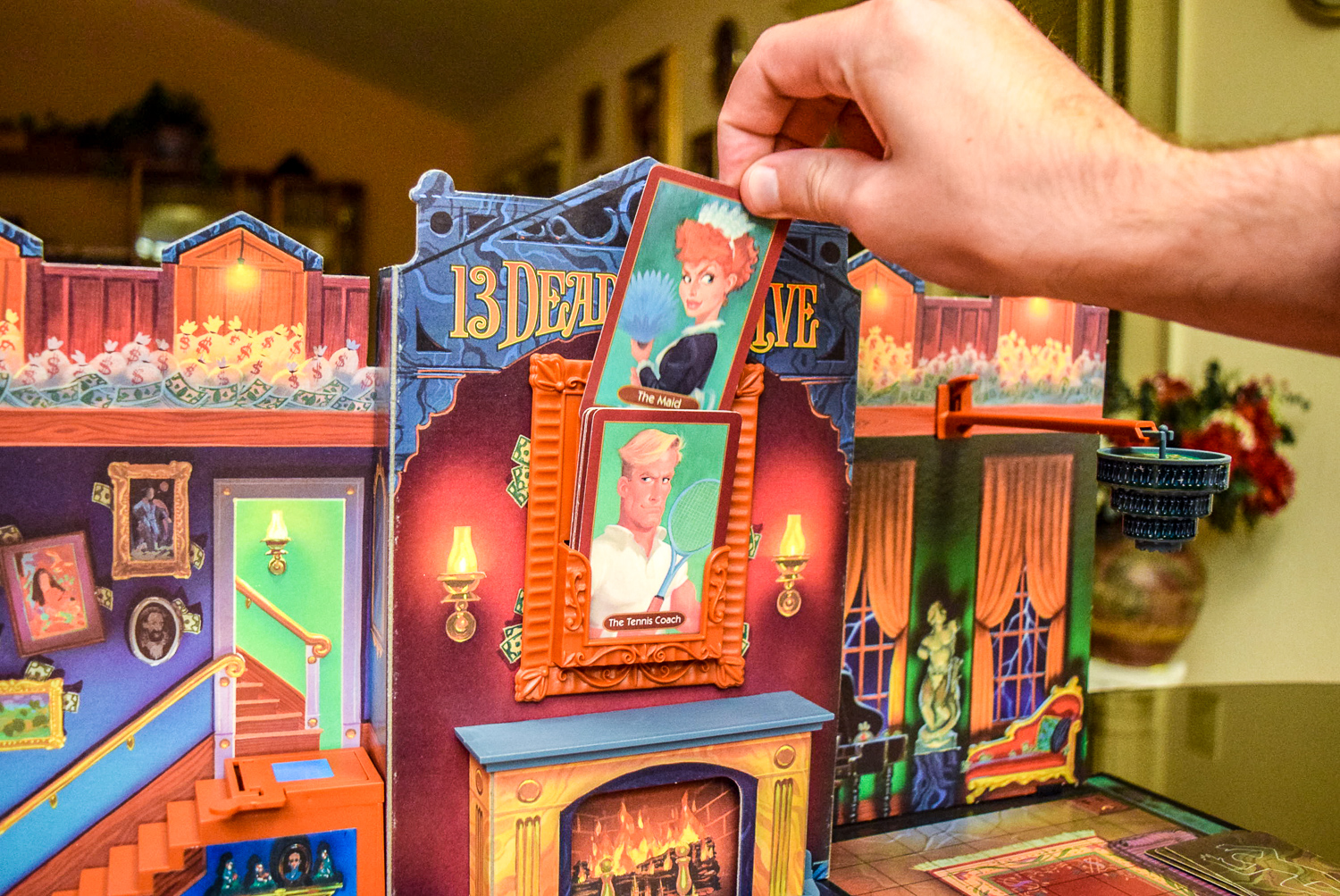 However, it really is difficult to stay alive with traps scattered around the mansion and blood-thirsty guests all vying for the win. 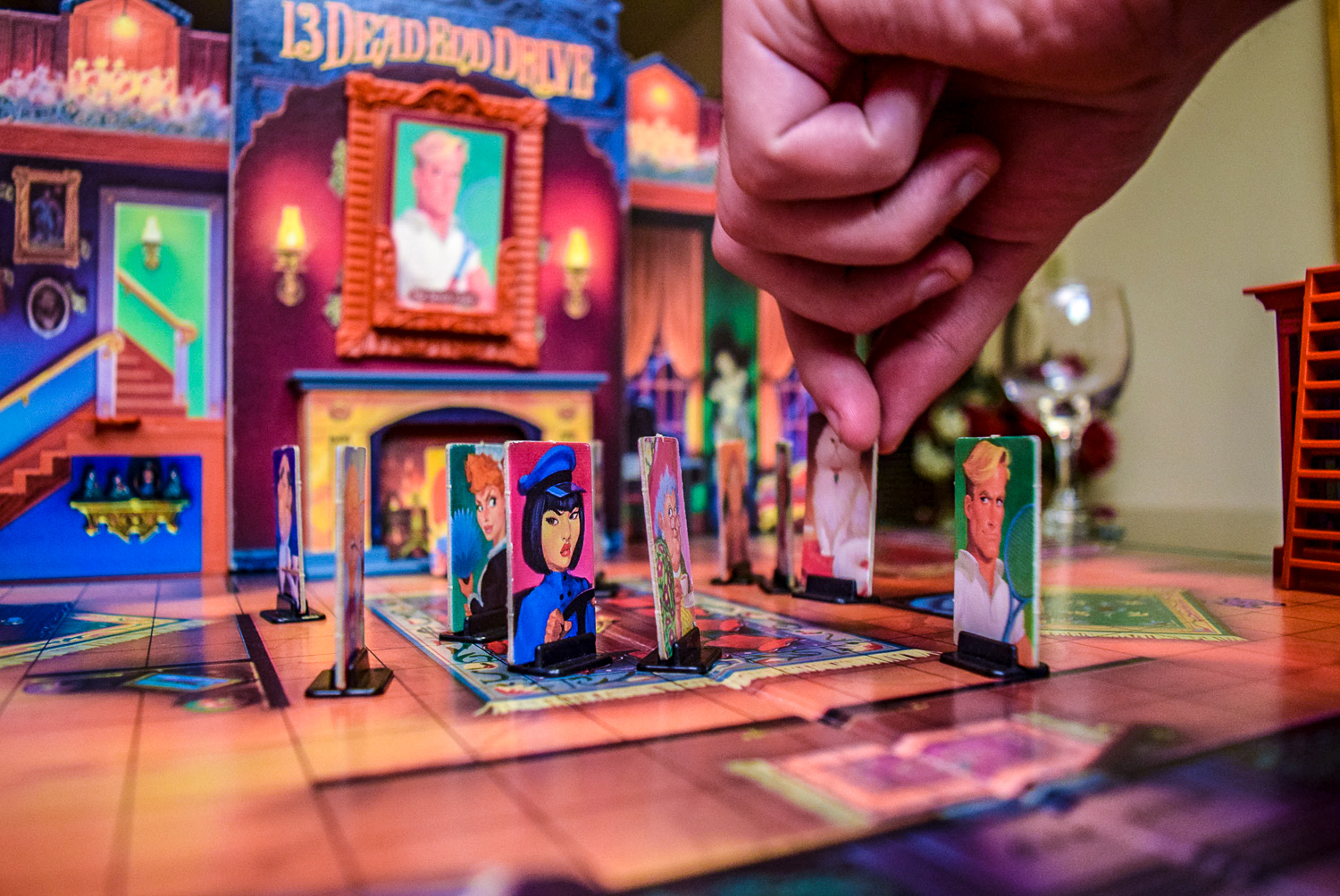 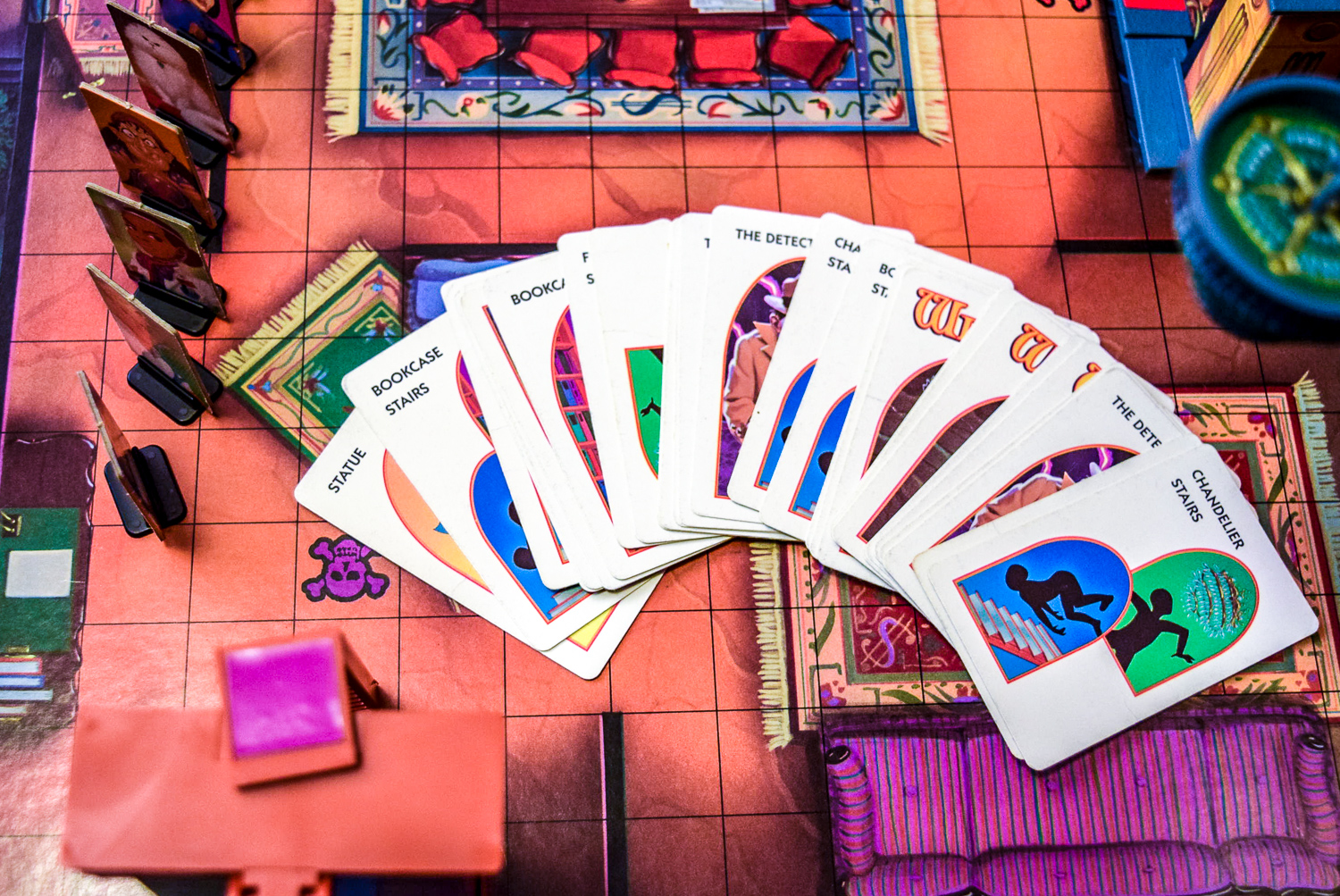 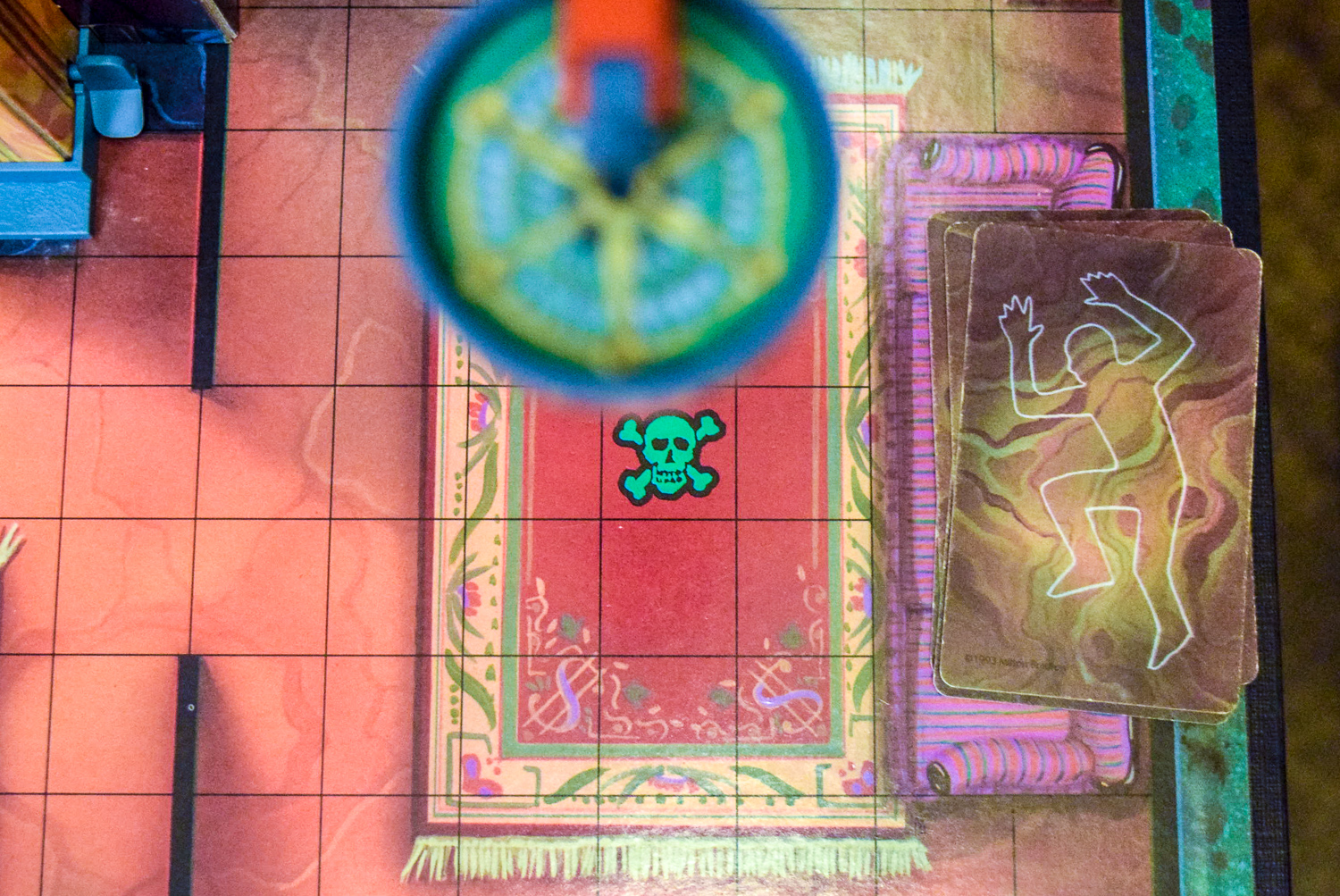 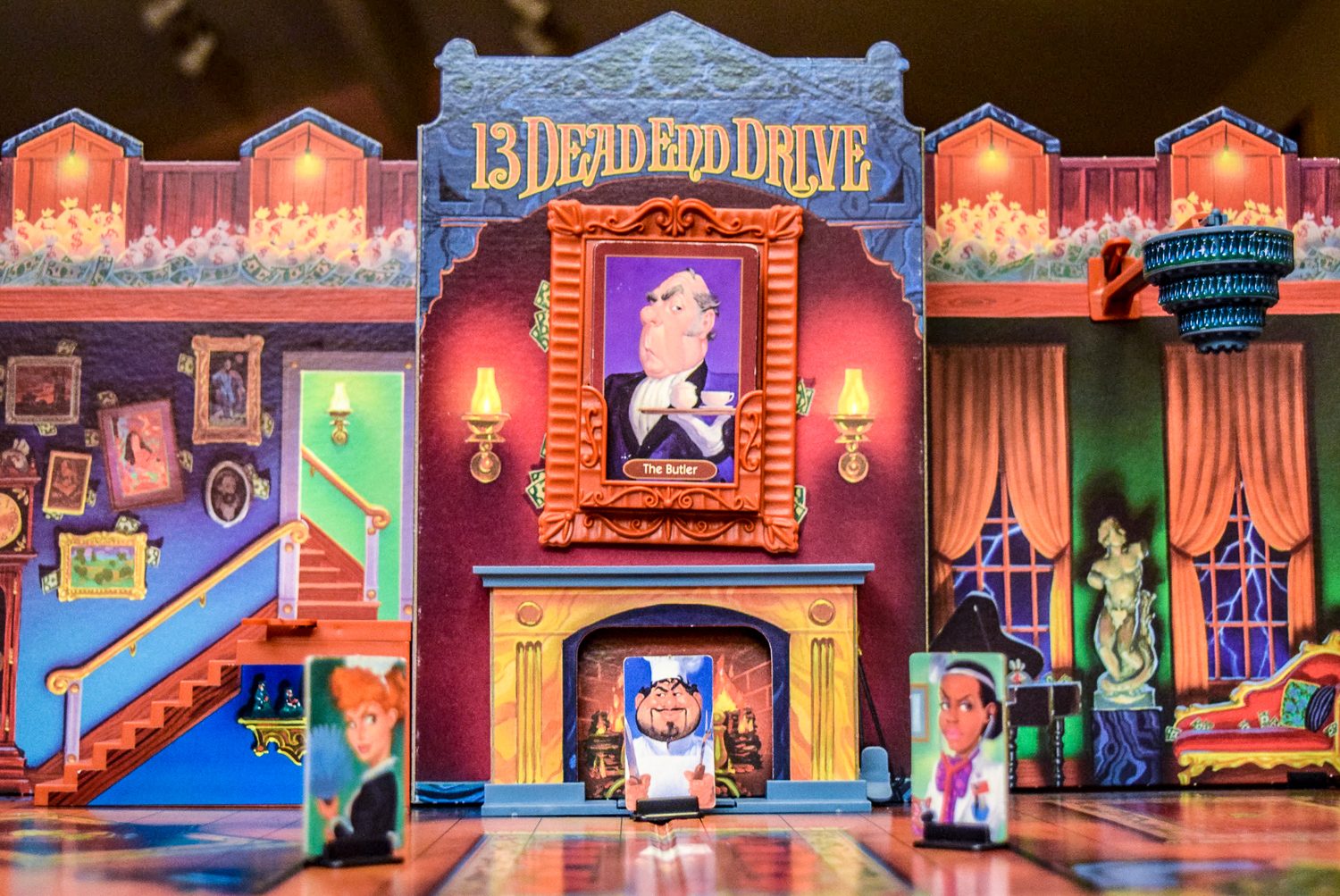 Rather than diving into the game play, I’m going to showcase my favorite part of the entire game—the five 3D Trap Mechanisms.

In the first 3D Trap Mechanism, characters are flung down the stairs to their demise. Simply place the character at the top of the stairs on the blue square label and press the lever. 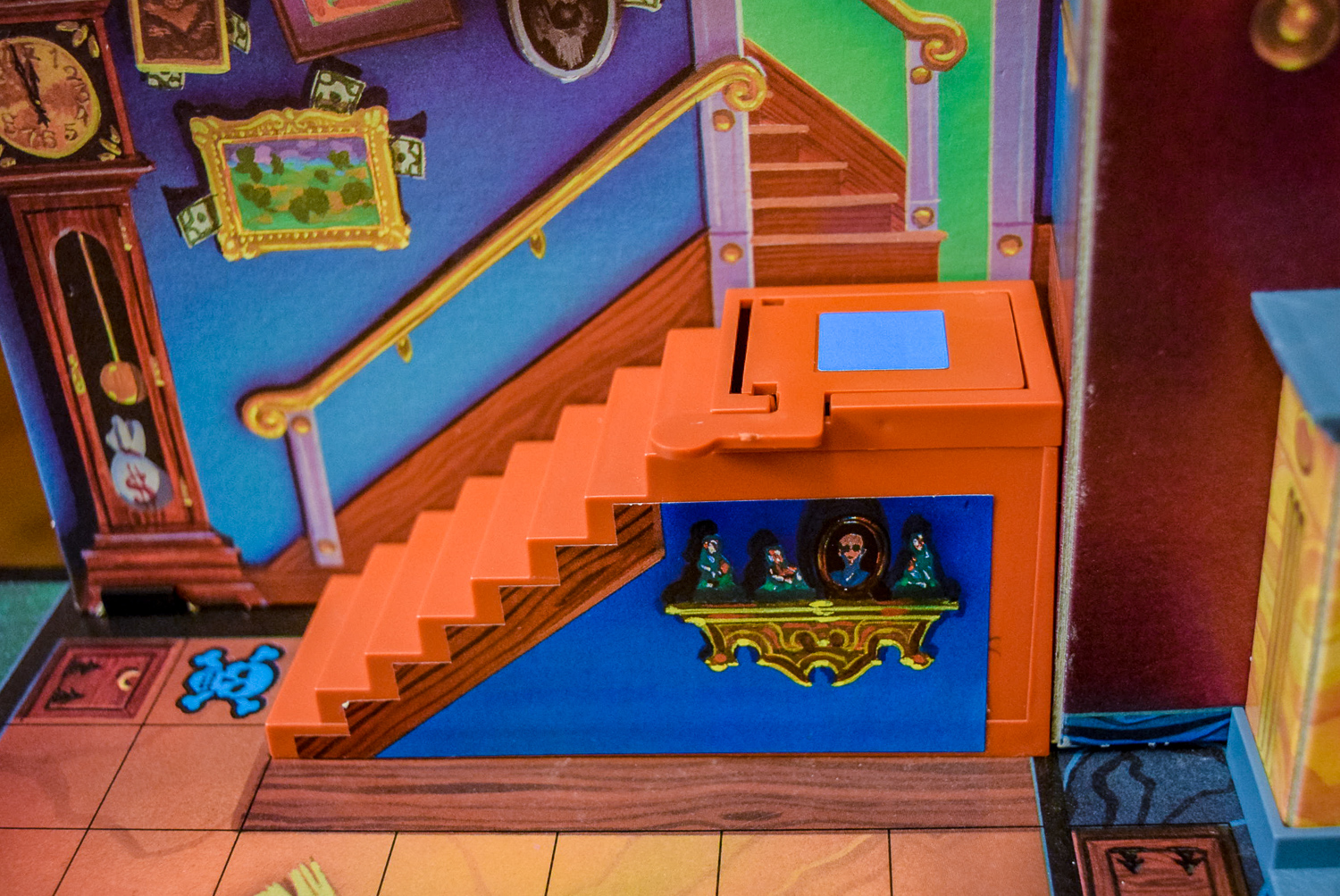 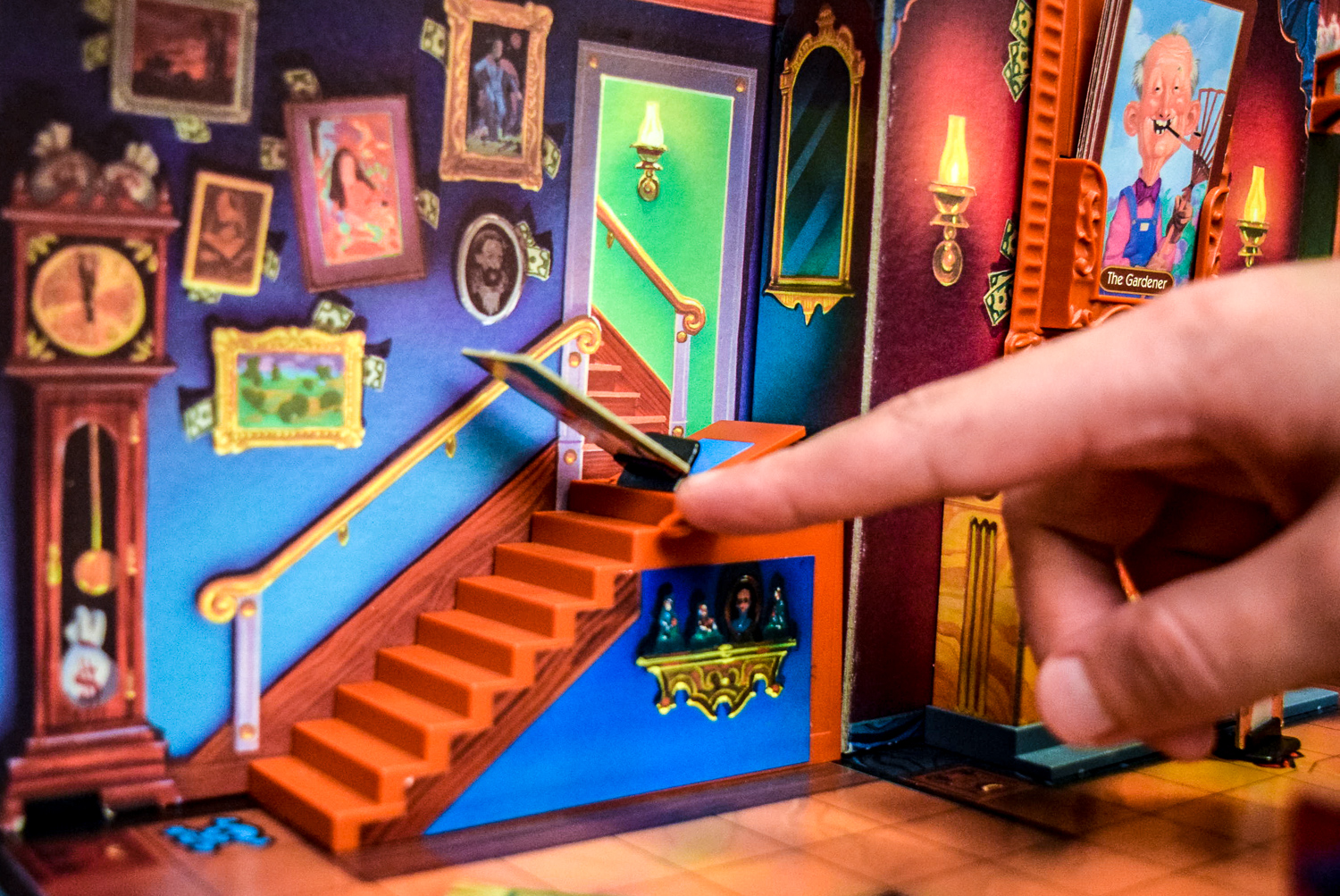 “A statue befell him…”

With the Statue Trap, pressing the lever topples the Statue onto the character. 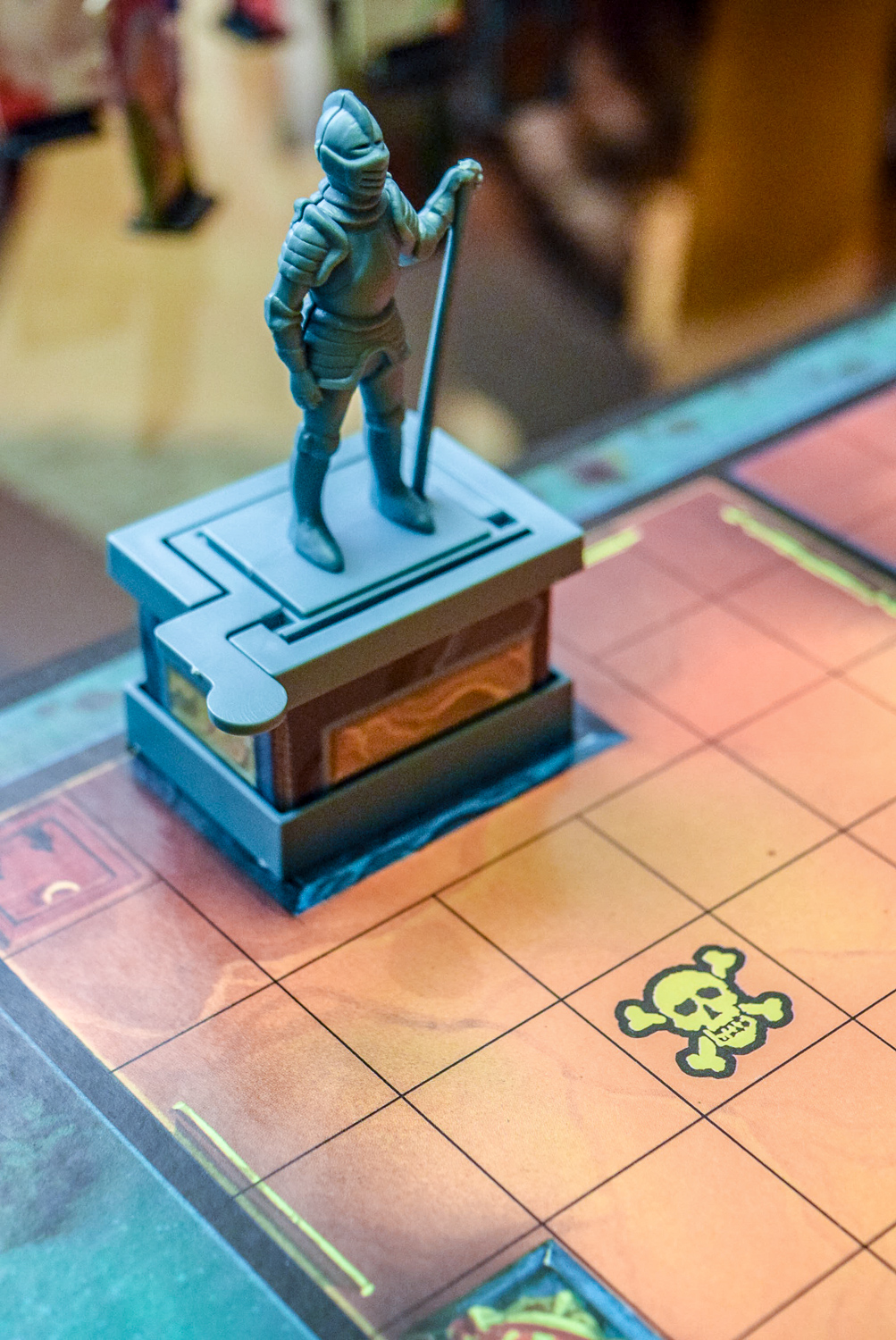 For the Bookcase Trap, the character climbs up the ladder and is placed on the purple square label on the top of the ladder. When the lever at the back of the bookcase is pressed, the ladder and character upon it are knocked off. 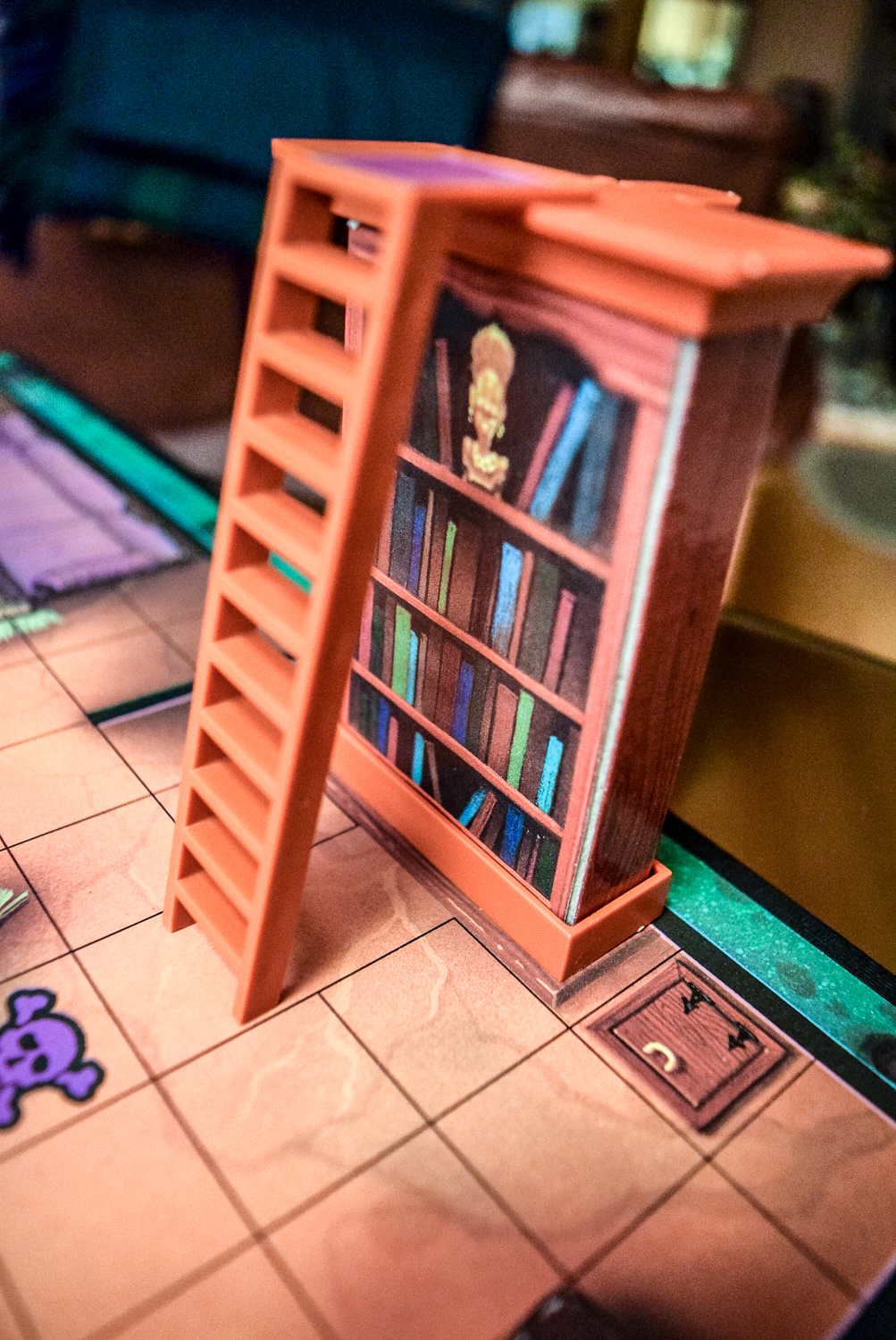 “Things are heating up!” 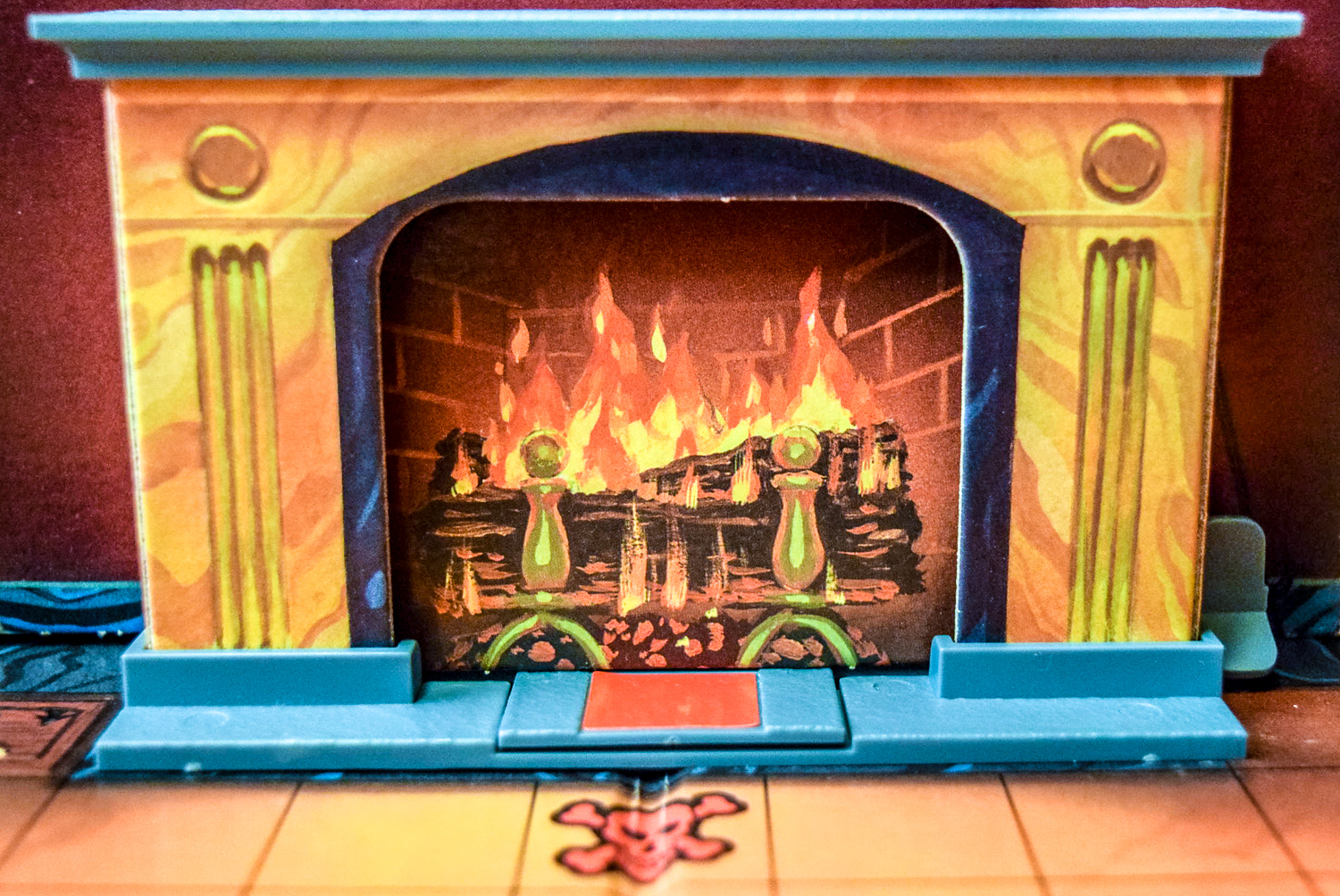 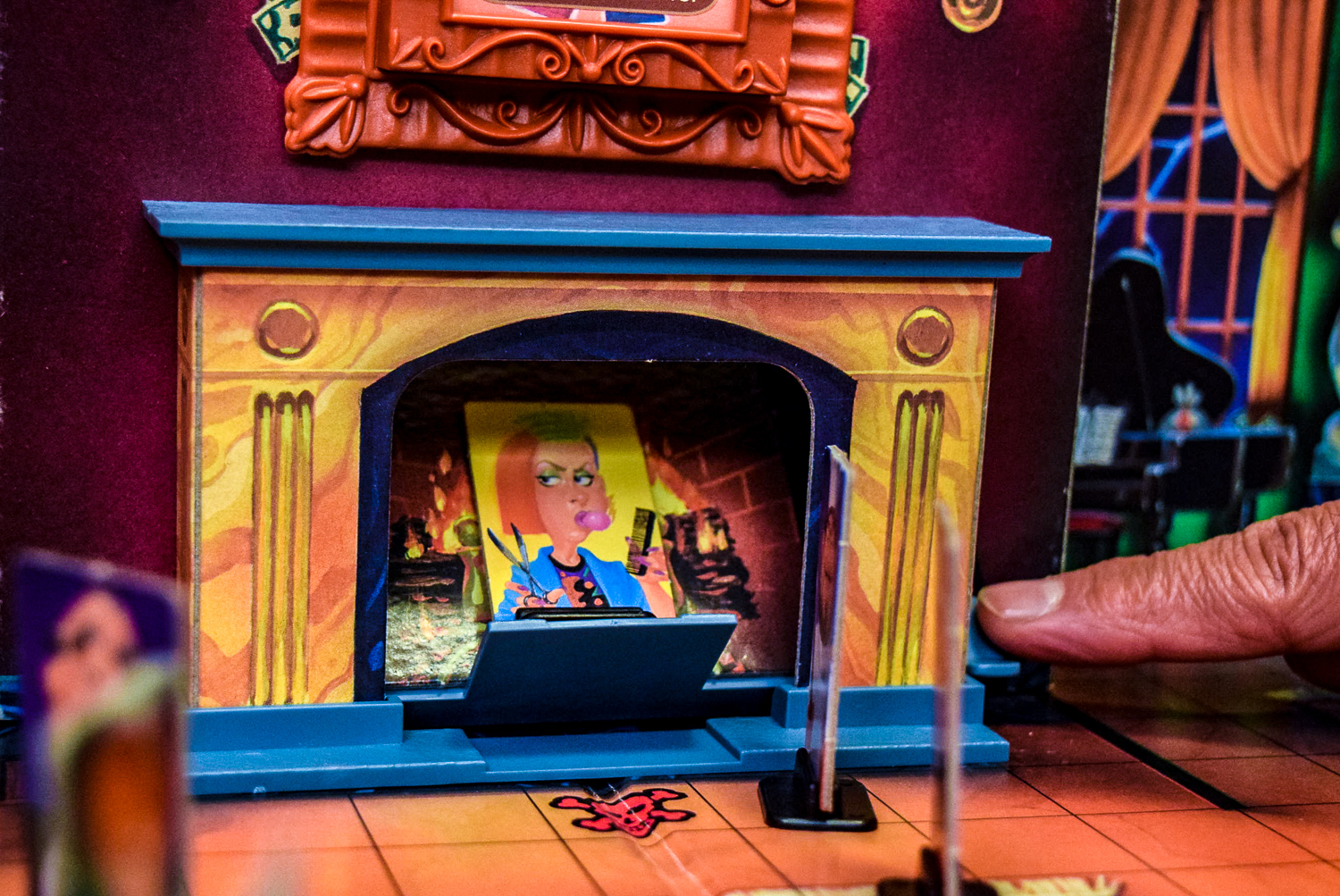 My all-time favorite Trap Mechanism in 13 Dead End Drive is the Chandelier Trap. The concept is simple: with one push of a lever, a chandelier drops upon a character.

As a child, I had never seen anything like this mechanism before, and I found it so fun to study. It was my first exposure to assembling and operating a mechanism. Even as adults, we investigated the Chandelier Trap Mechanism for a few minutes until we all understood how it worked. 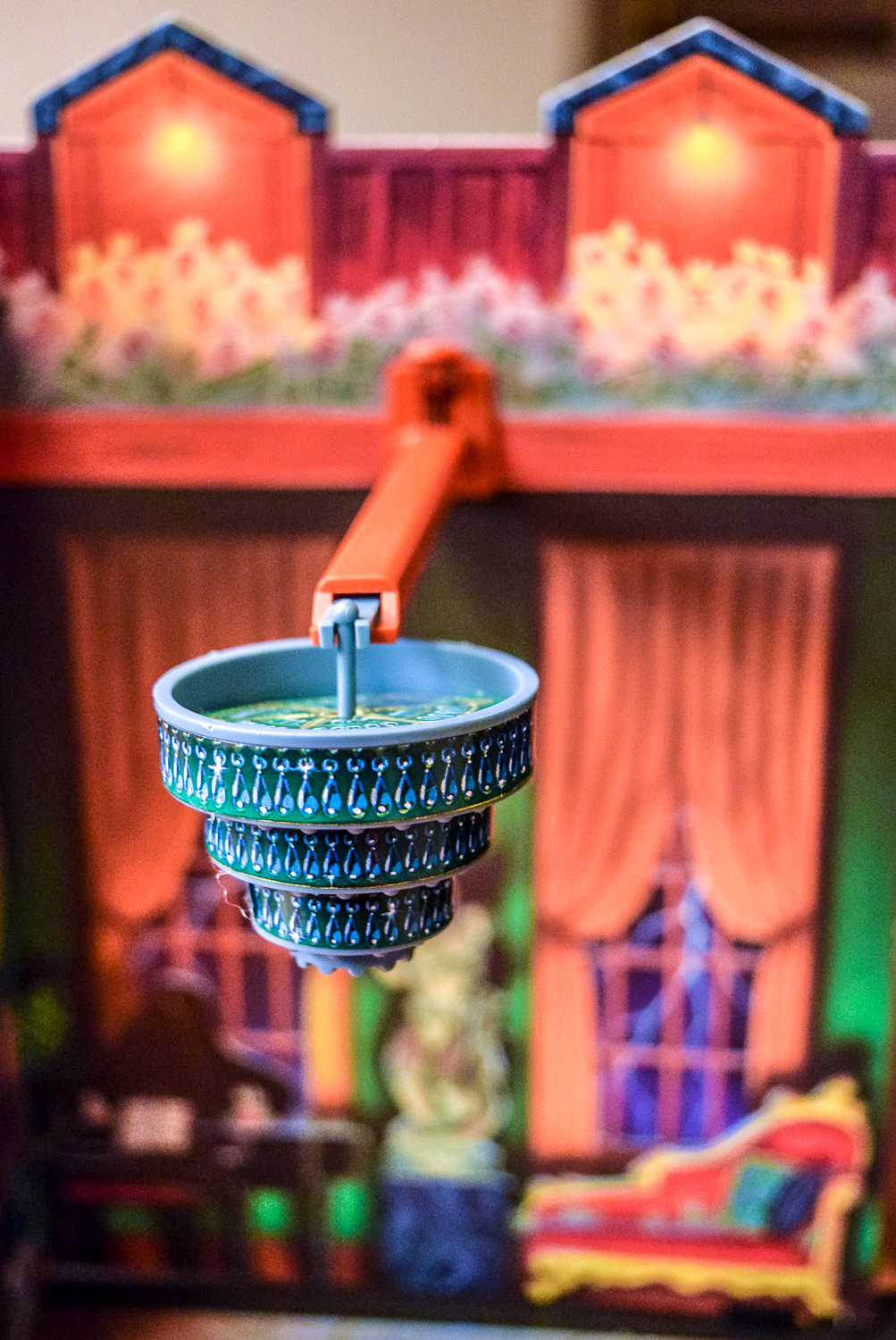 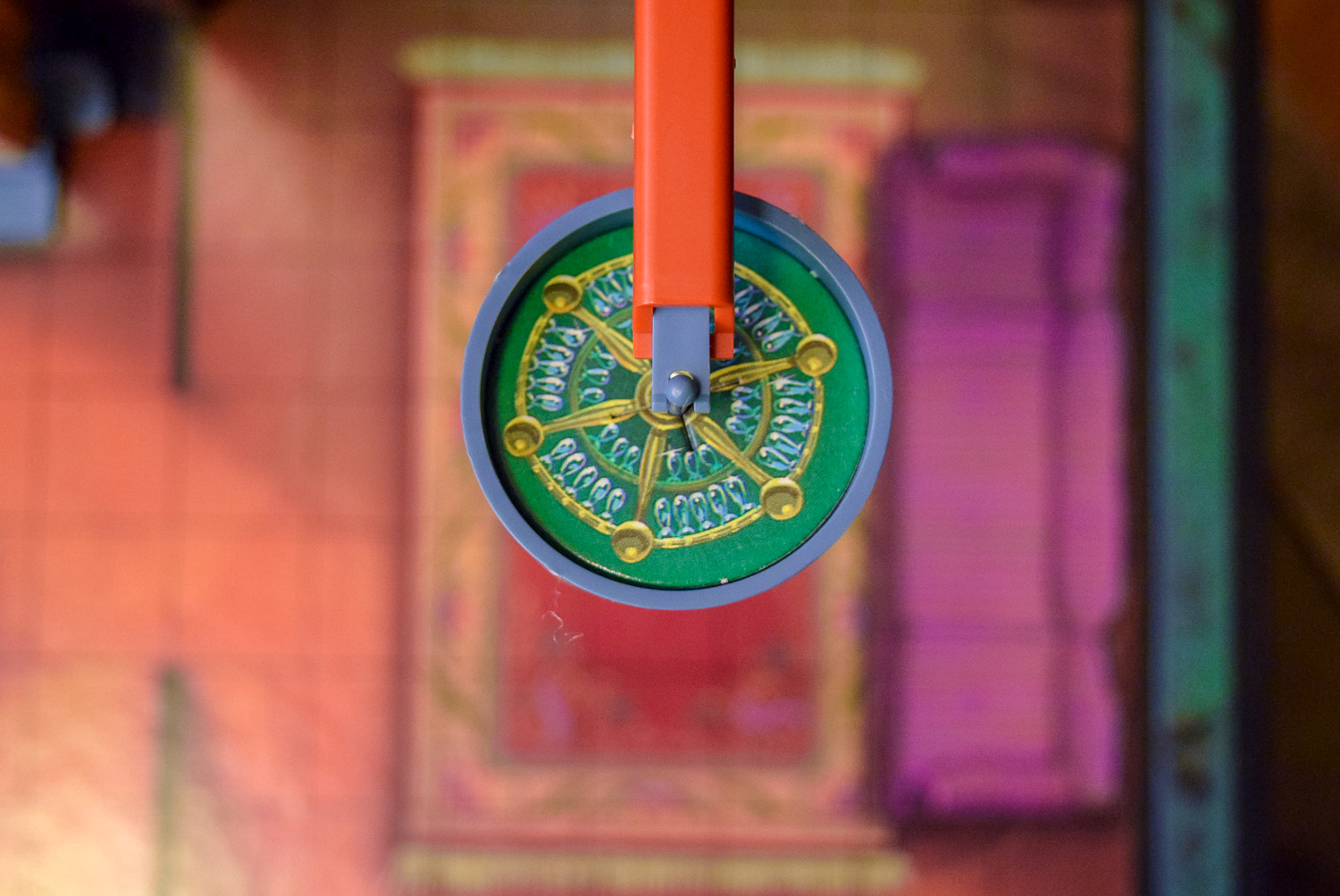 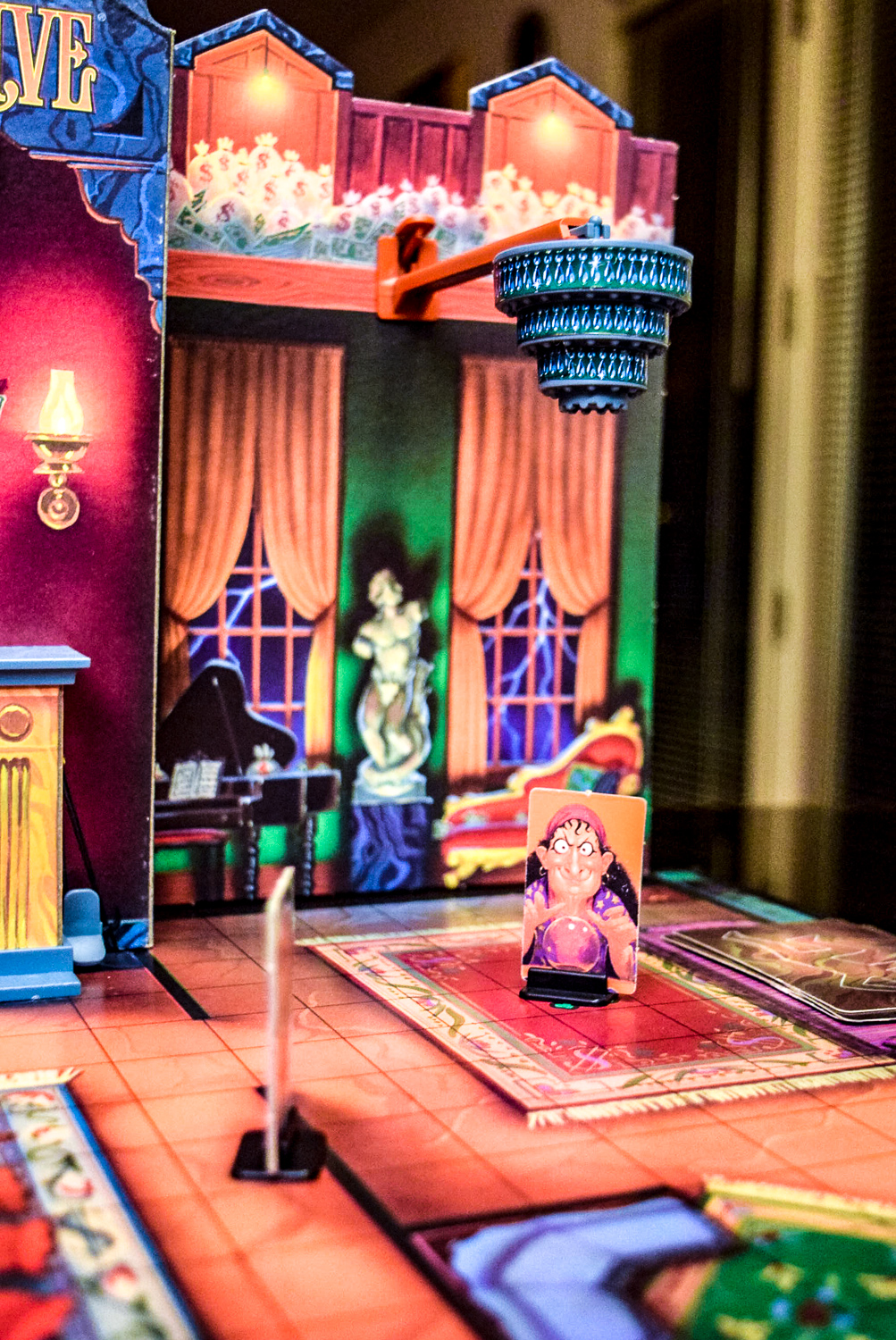 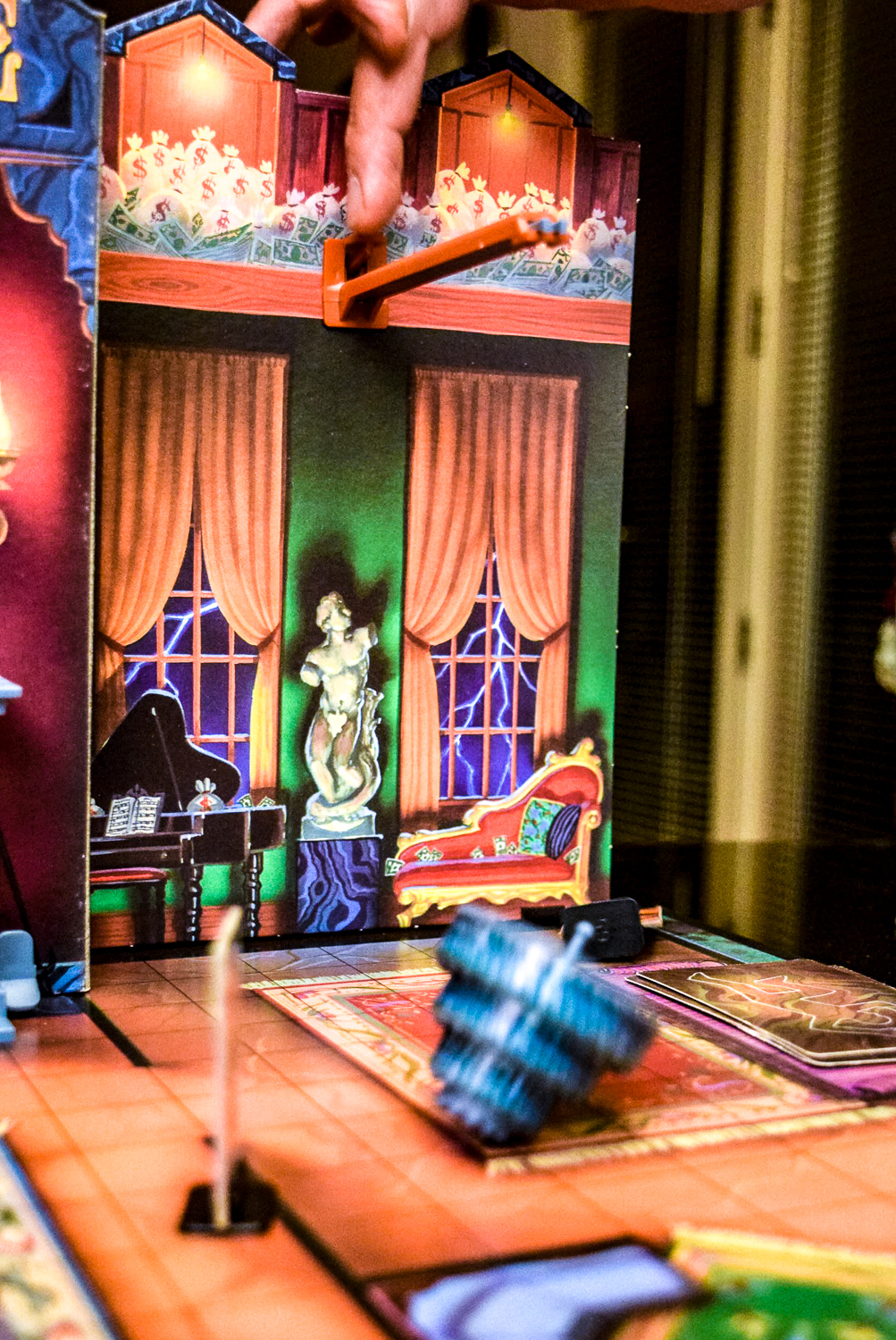 Beyond these Trap Mechanisms, I’d like to also call attention to the creative brilliance of the game makers in designing a resilient, 3D board game with the base board and back board made of cardboard and held together with plastic tension clips. Check out the assembly instructions if you are curious to see more details. With this simple set of materials, they created a mansion with falling chandeliers and disappearing fireplaces!

Games like this inspire a new generation of Engineers and Designers. I hope more game makers continue to explore creative approaches to leveraging basic materials to inspire curiosity in their players. If you like these mechanisms, I recommend checking out the Top Three Reasons I Love Camel Up

In searching for additional copies online, it looks like 13 Dead End Drive may now be considered a vintage game and is a bit tough to acquire at a reasonable price. Milton Bradley even released a sequel 1313 Dead End Drive, which is slightly easier to acquire, but I have yet to try it.

13 Dead End Drive brought me hours of entertainment and mechanical inspiration as a child and persists as a personal favorite. I hope you get the pleasure of playing it with your friends and family too! 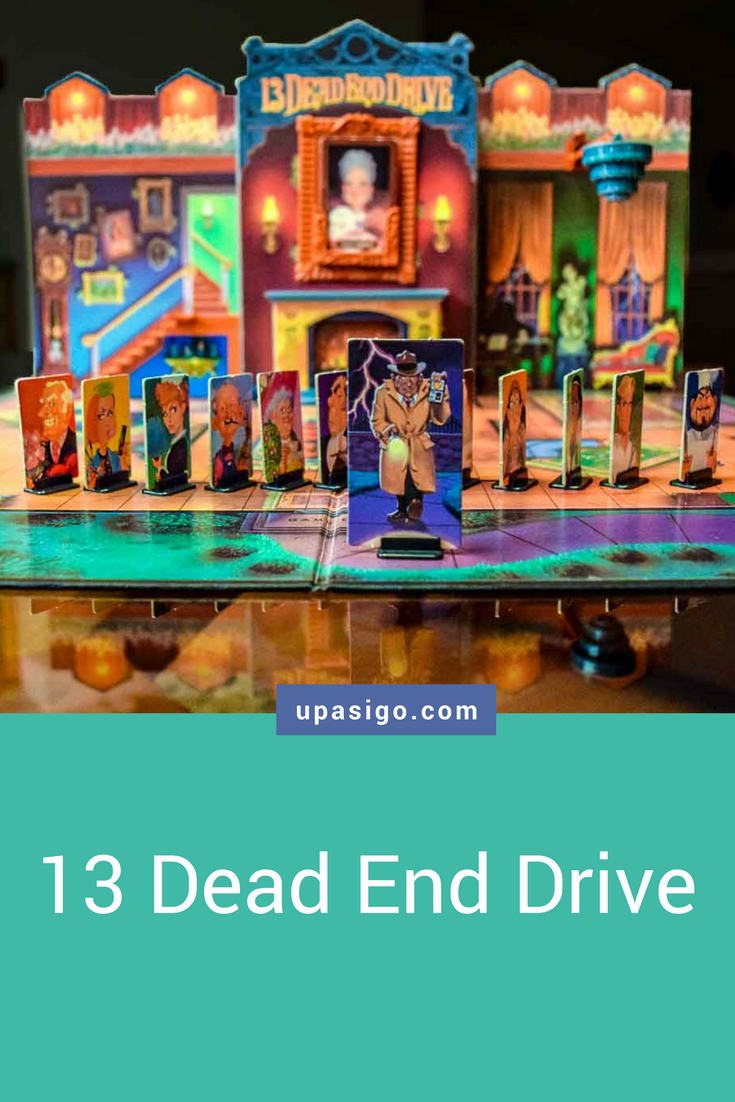