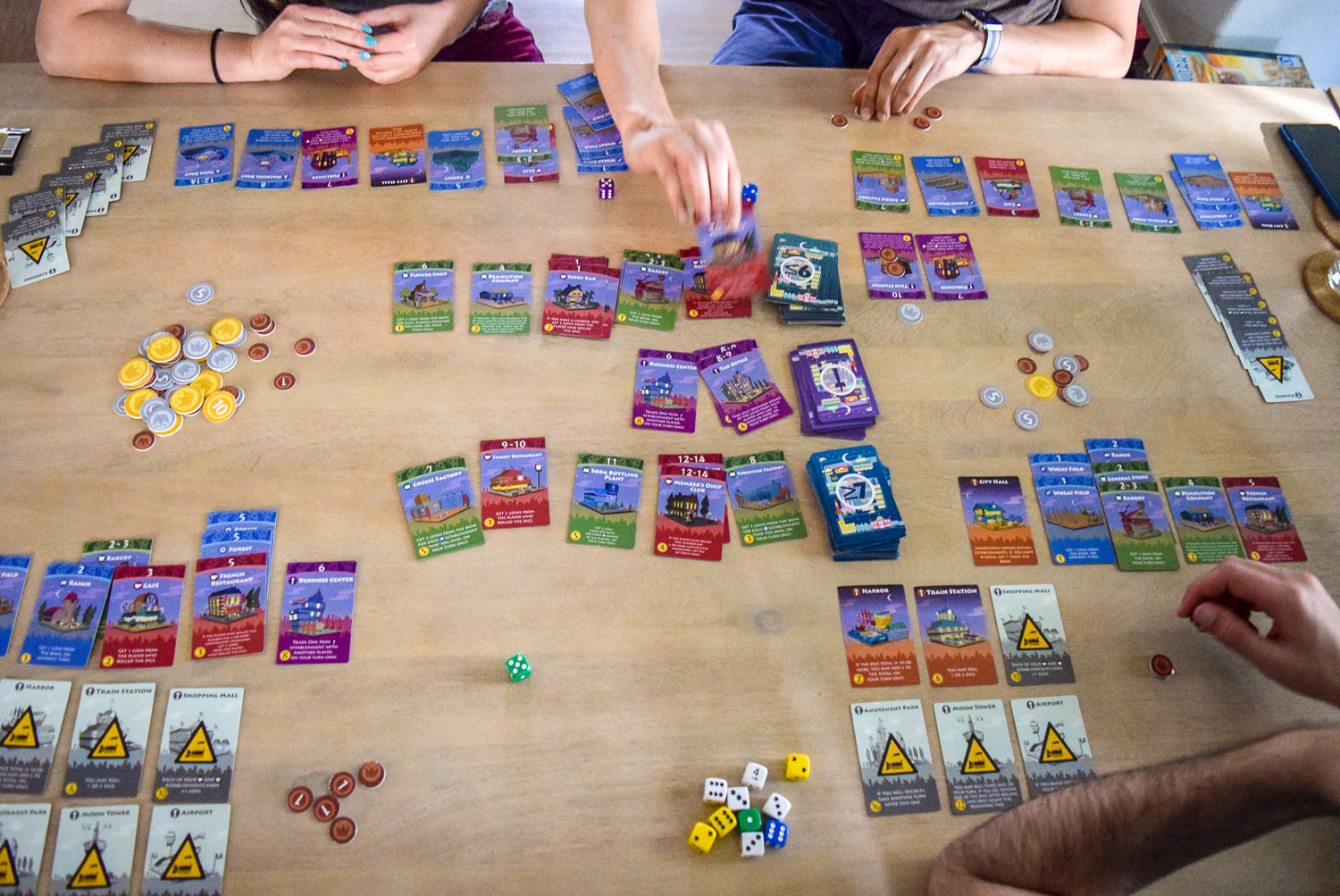 Armed only with your trusty die and a dream, you must grow Machi Koro into the largest city in the region. You will need to collect income from developments, build public works, and steal from your neighbors’ coffers. Just make sure they aren’t doing the same to you!

I love trying new games, so when my friends suggested playing Machi Koro: Bright Lights, Big City at a recent game night, I was all in. The game did not disappoint. I had a fun time learning it (and winning gloriously).

Machi Koro is a city-building card and dice game for 2-4 players and it was a Spiel des Jares Nominee in 2015.

Here are three reasons you might want to give Machi Koro: Bright Lights, Big City a closer look: 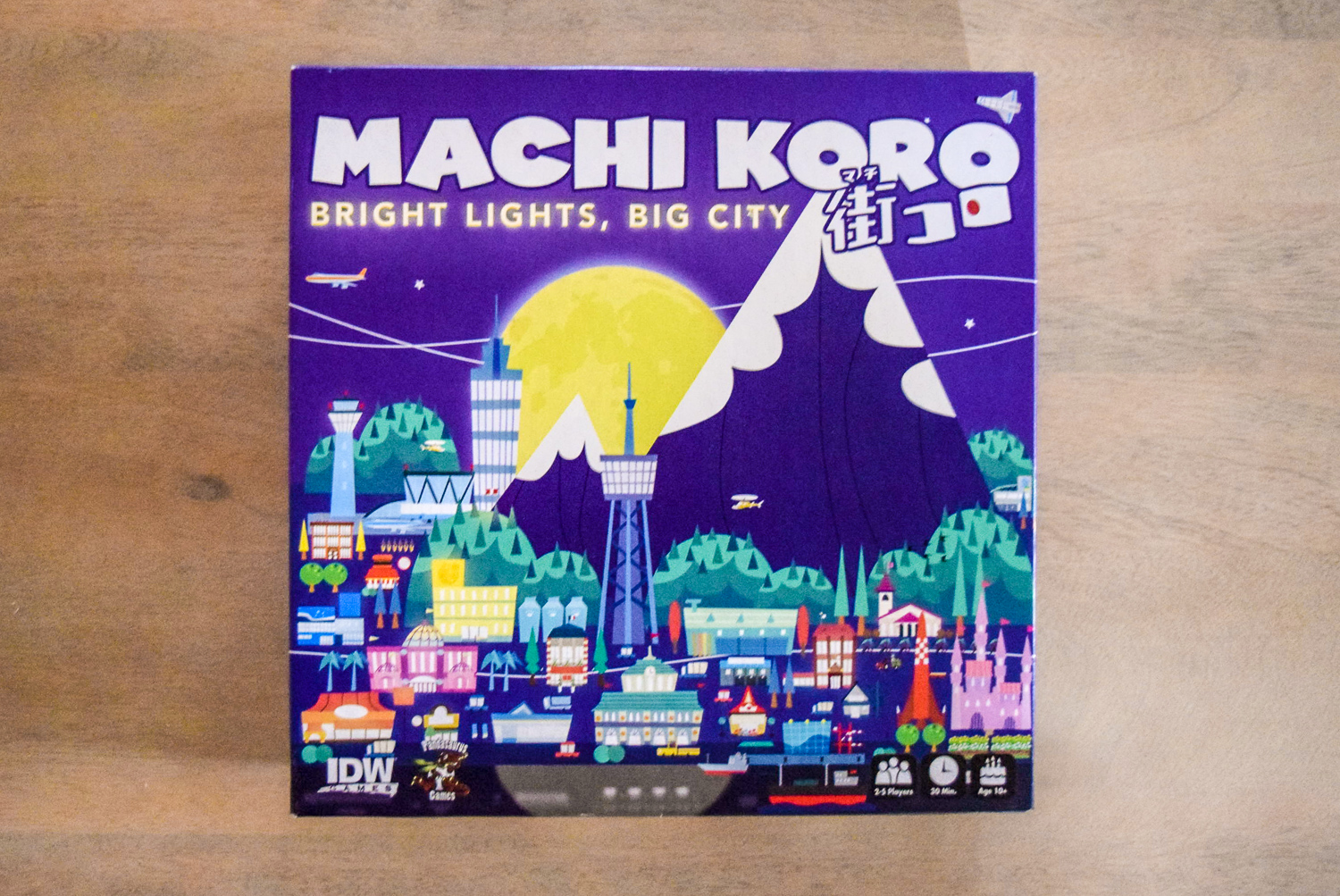 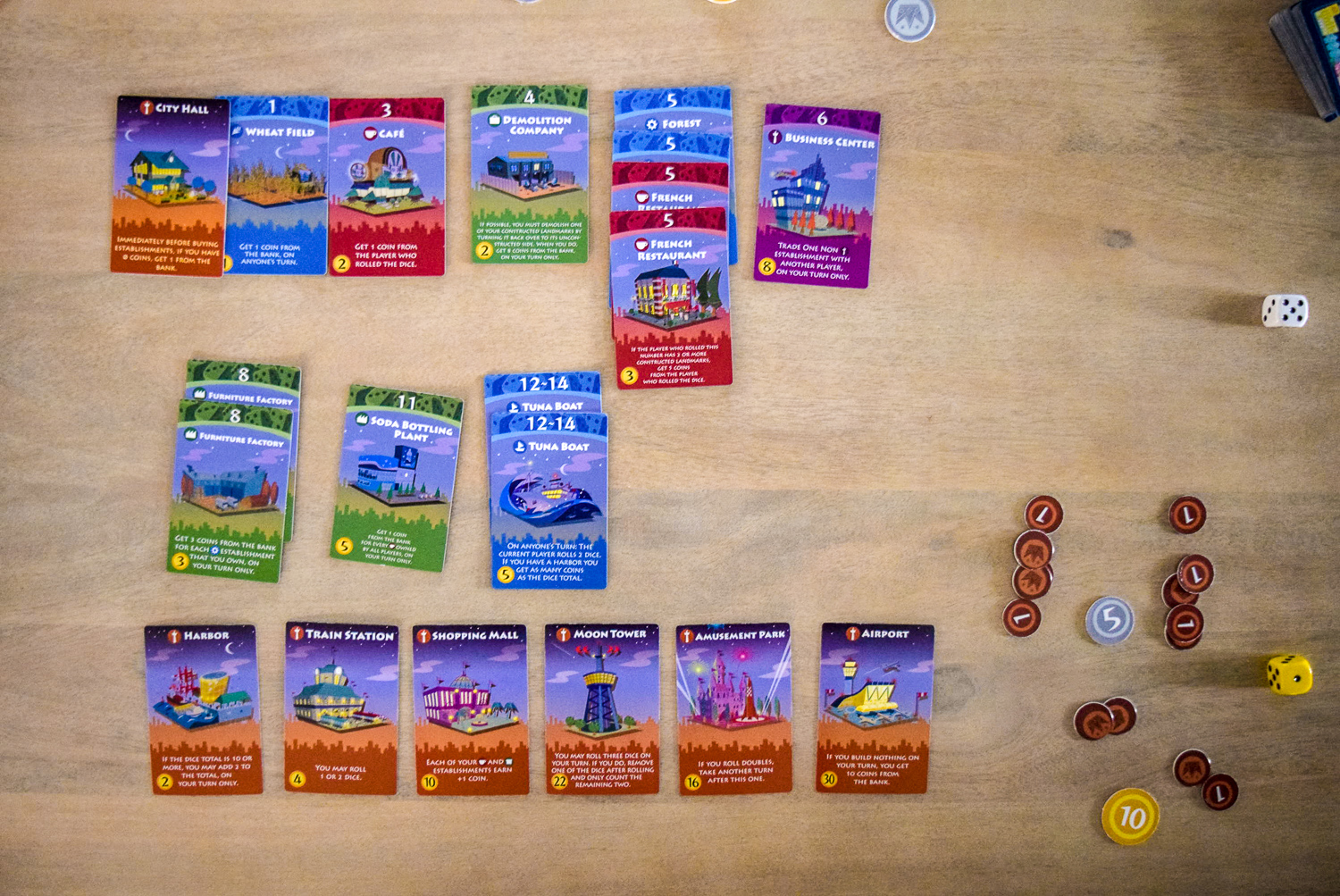 Machi Koro is a game of chance that involves a lot of dice rolling, but it has just enough strategy to keep things interesting. With lightweight rules, players can dive in and start playing quickly.

As players get more familiar with the rules and options, they can strategize more. Though, at least with the base game, a lot does boil down to chance. 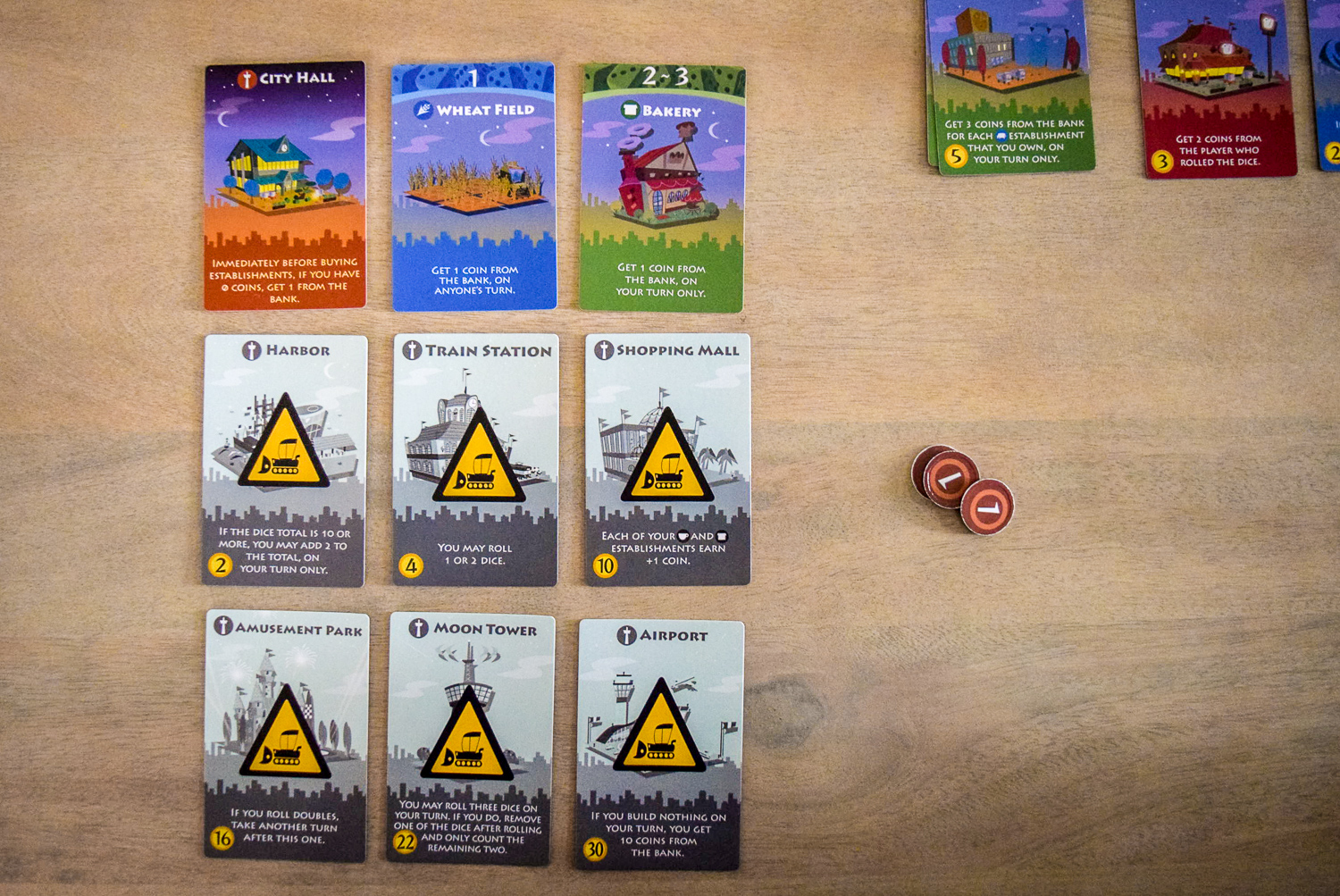 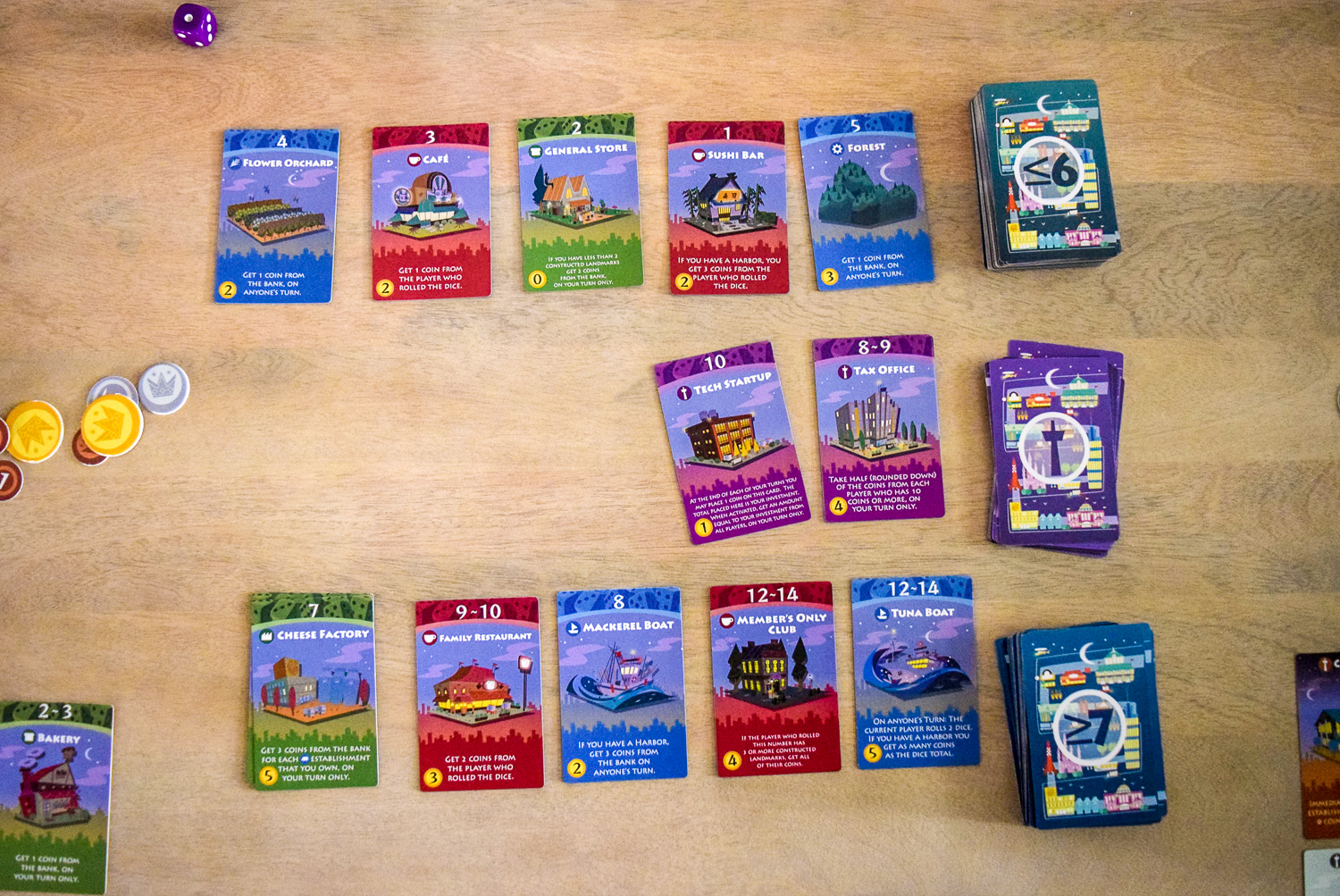 Like any good gateway game, it offers a taste of what more strategic games involve without requiring new players to learn a complex rule set. Some of the actions are even color-coded!

The high element of chance makes it easy to keep the game moving without requiring clearly formulated strategies. 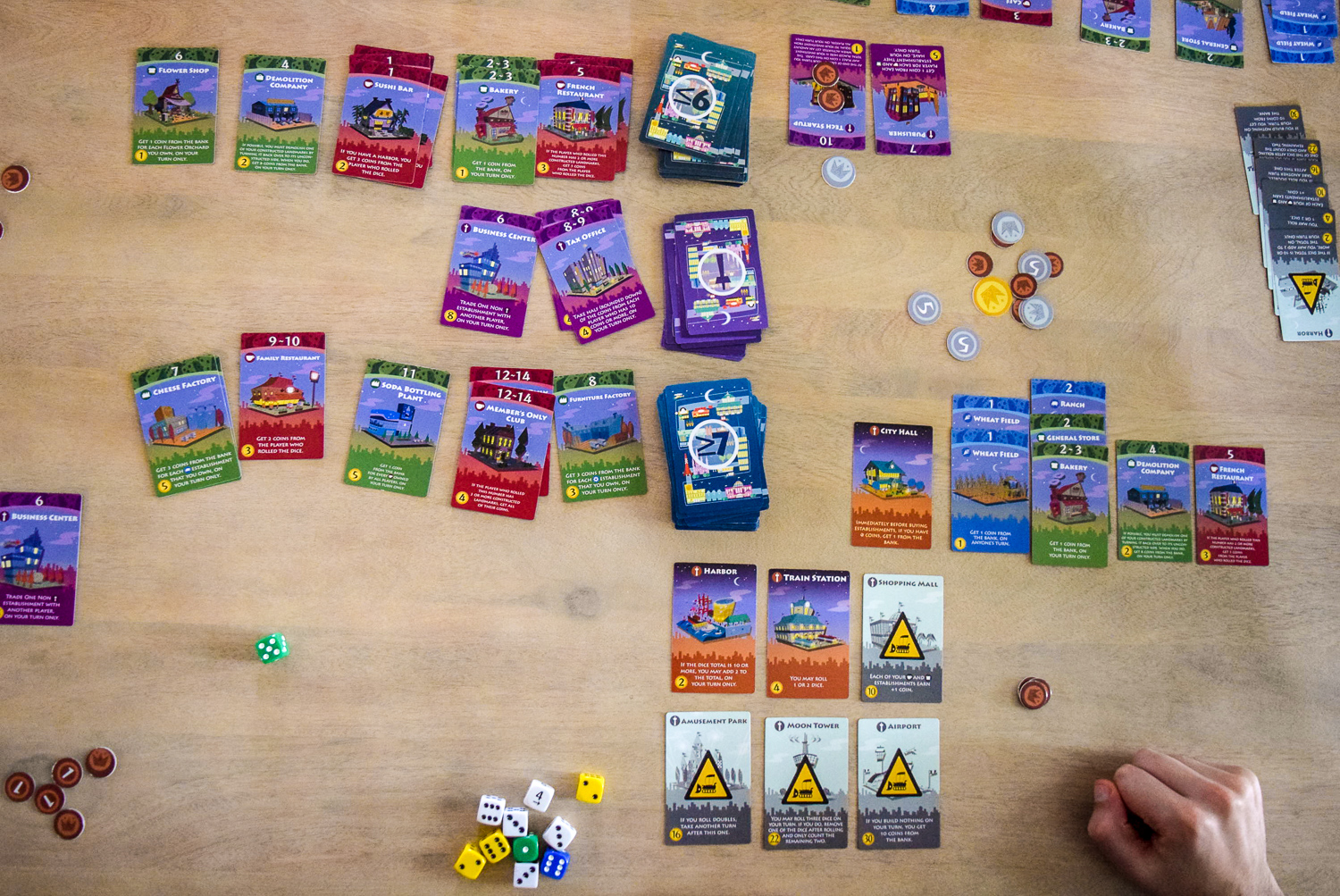 I found Machi Koro: Bright Lights, Big City to have a similar level of complexity as Ticket to Ride, Trekking the National Parks, Splendor, Carcassone, and Camel Up. It is a bit more complicated than 13 Dead End Drive, as it is targeted towards adults.

Machi Koro packs up for travel well. All you need to play are the cards, dice, and coins which can easily fit in a ziplock. I recently took a trip and forgot to pack games. Never again! 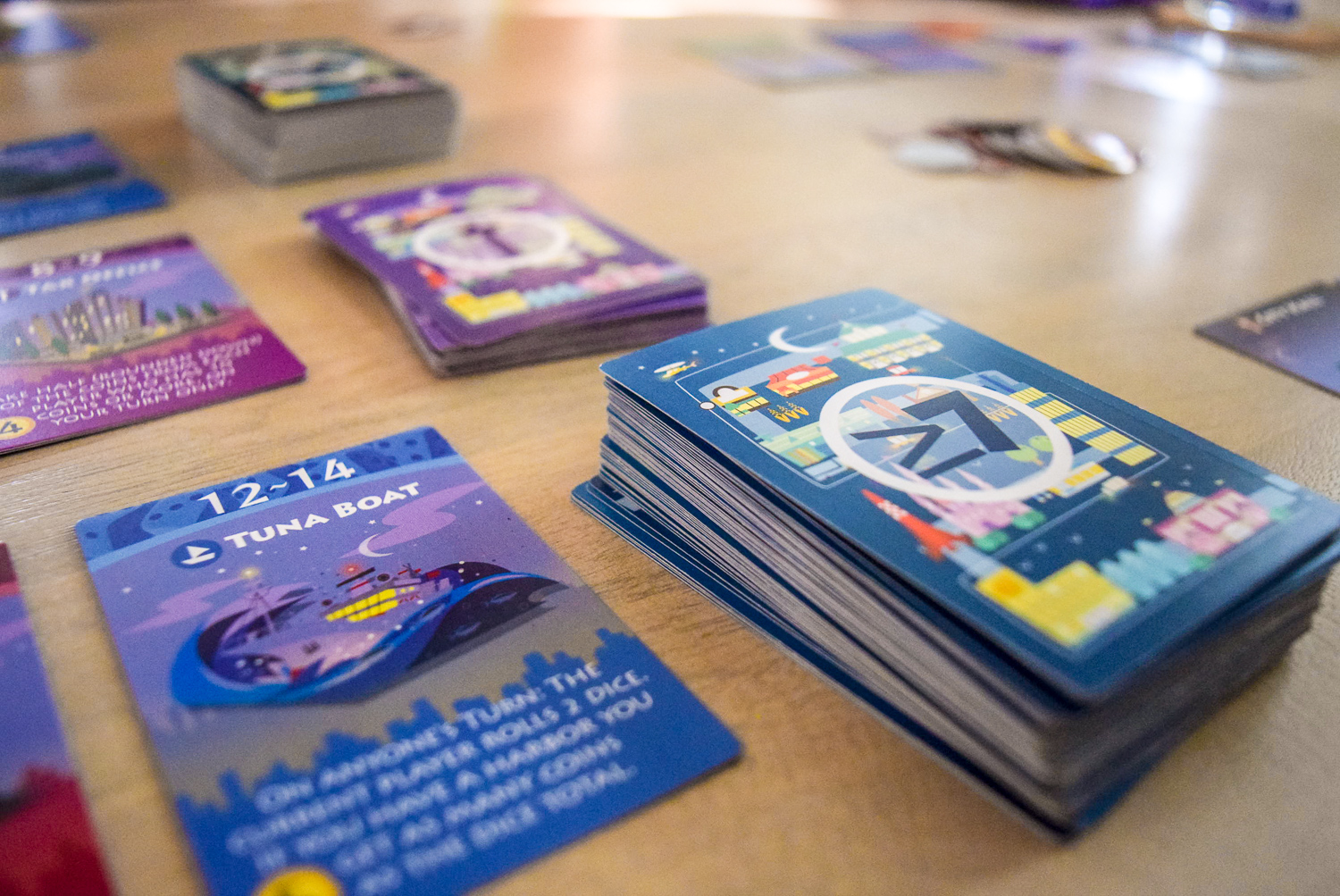 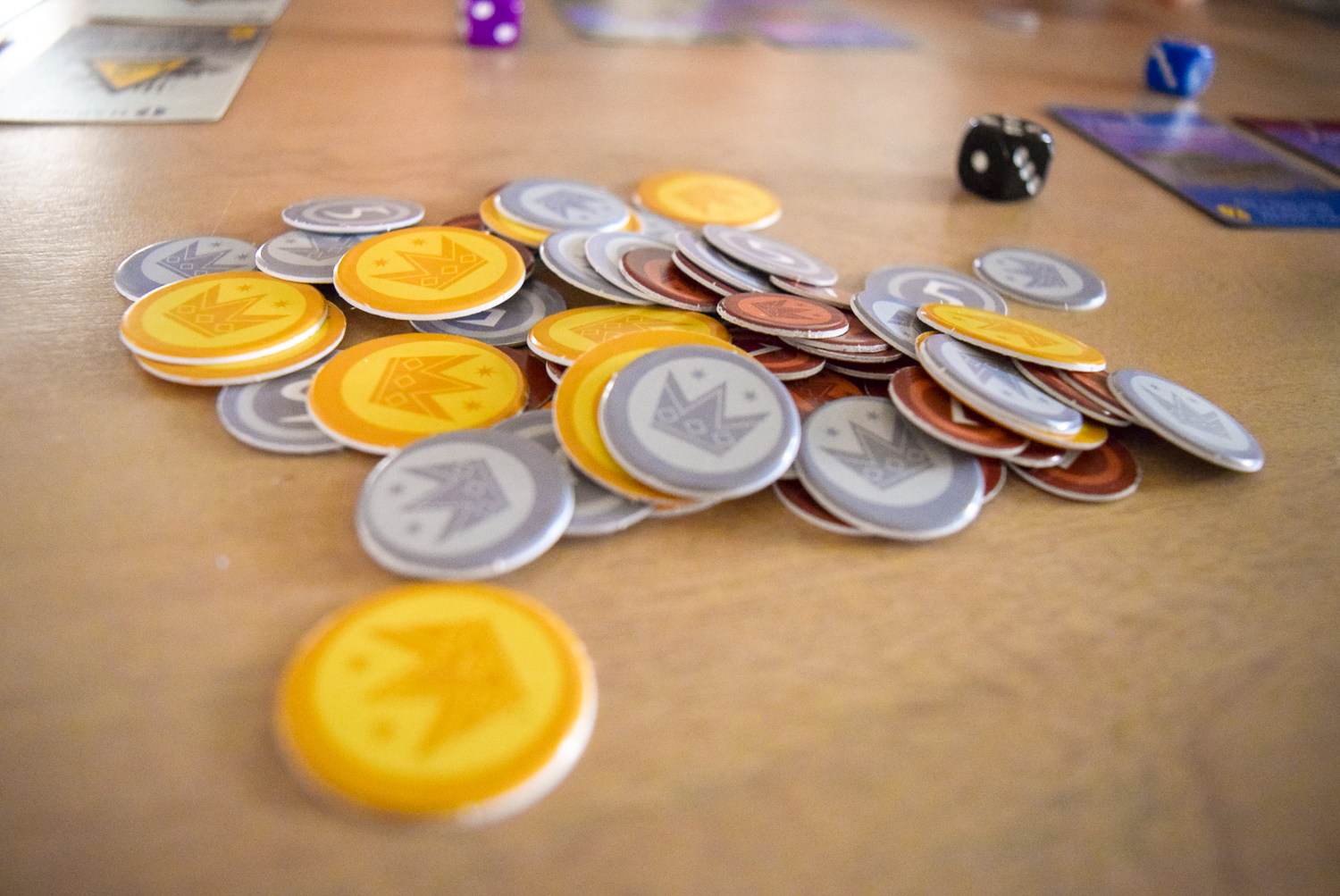 As a board gamer who wants to keep the fun going even while traveling, I’ve lately been far more cognizant of which games can pack up compactly. 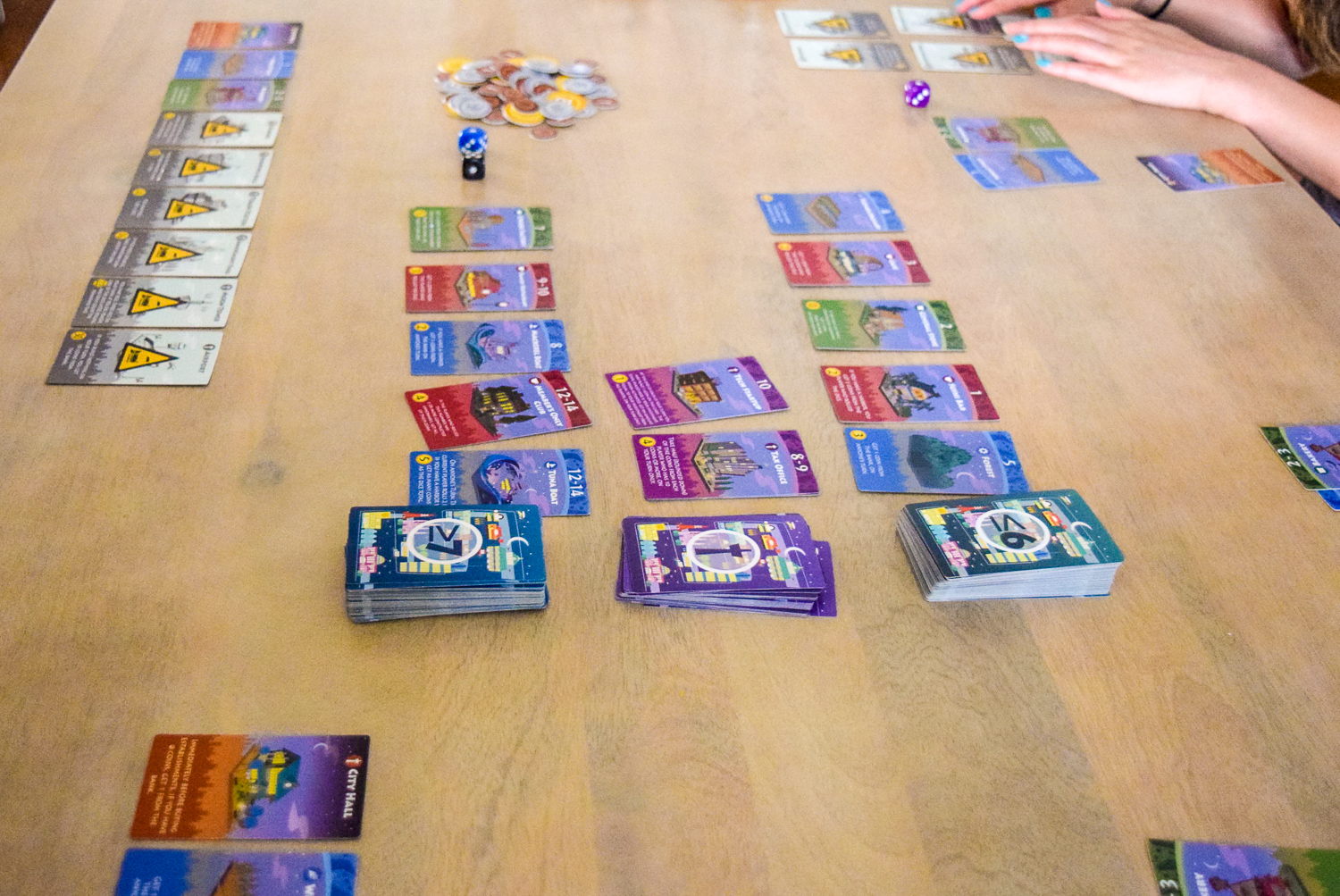 3. No Waiting for the Action

A common experience in board games is to find yourself getting bored, waiting for other people to take their turns. Other players are getting bored just like you, and eventually, people start losing focus, which just delays the game further. Who’s turn is it? Oh, mine!

The best part of Machi Koro is that players don’t have to wait for other peoples’ turns to do something. Every turn offers a chance that players will have to take some action: profit off of other players or they profit off of you.

This element keeps players engaged throughout the game. There are few dull moments, and as a game of chance, there are often unexpected swings in fortunes, keeping players on the edge of their seats. 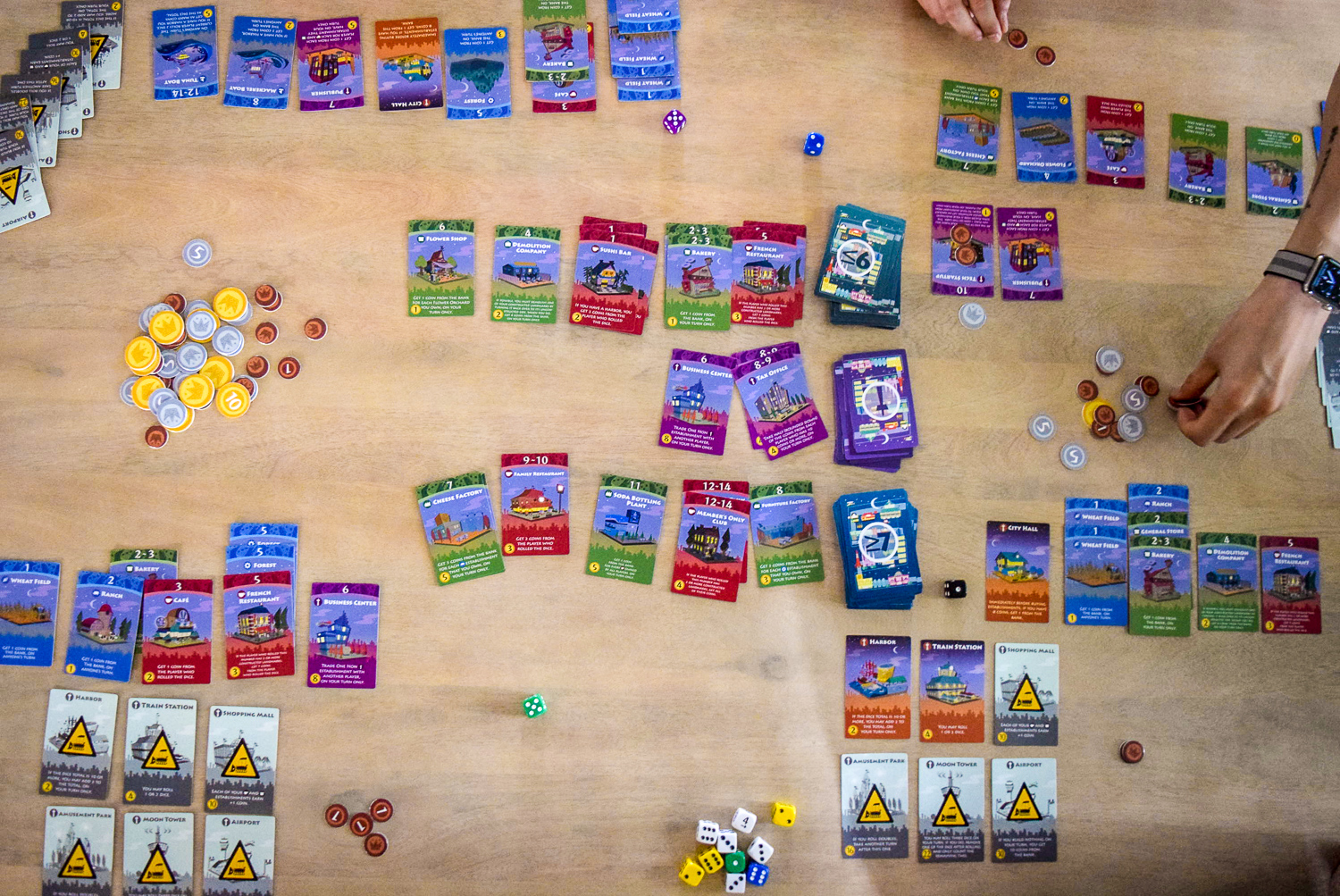 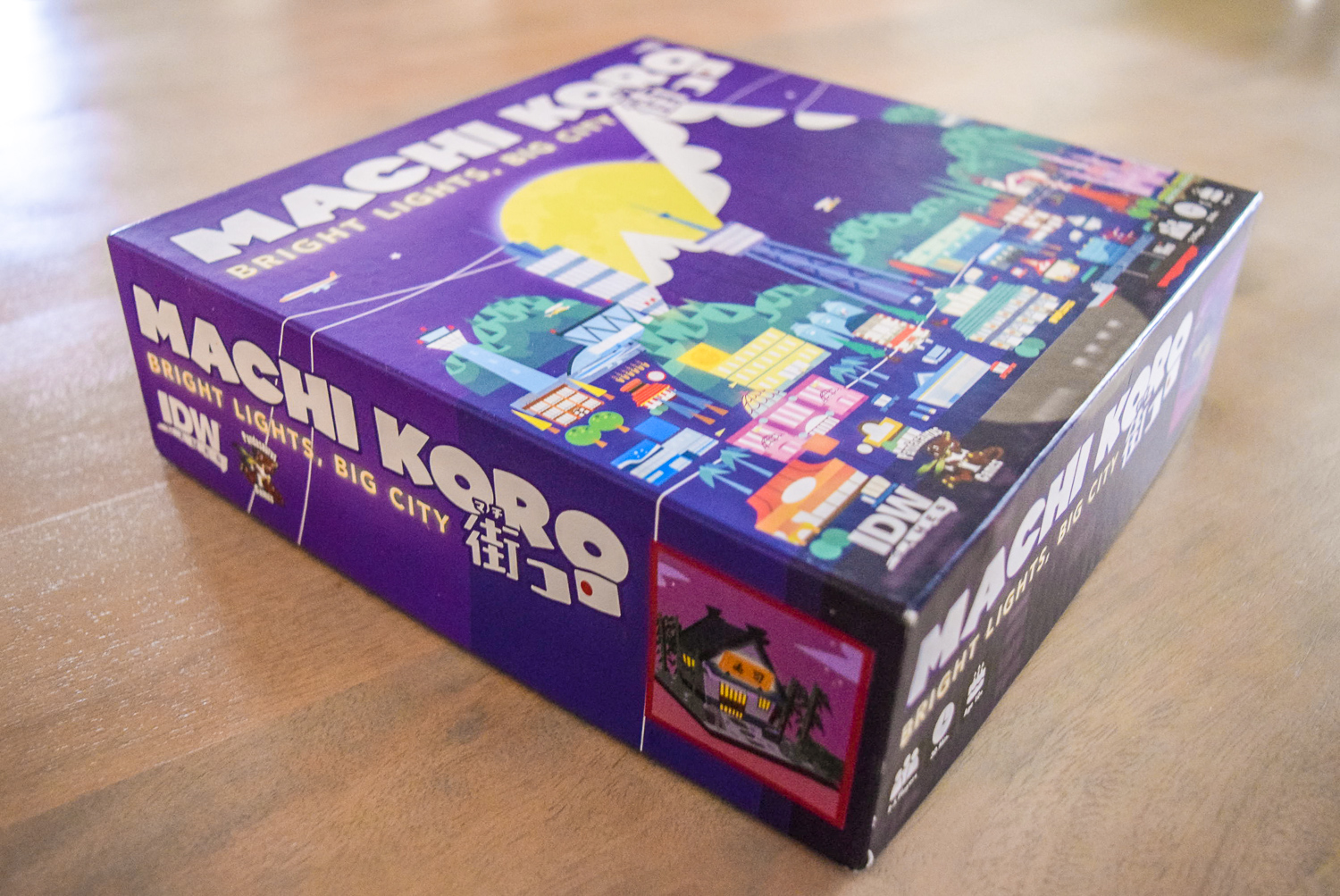 I had fun playing Machi Koro. I hope you do too! Let me know if you give Machi Koro a try.